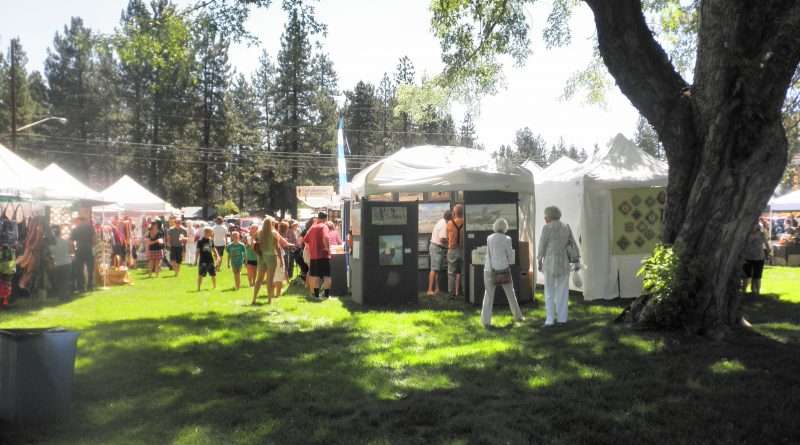 Attendees at a past Almanor Art Show enjoy a summer afternoon on the beautiful Collins Pine Lawn In Chester experiencing an amazing selection of art presented by the artisan makers of the work. Photo submitted
News
July 9, 2021 Editor

The Almanor Arts Show celebrates its 51st anniversary on Saturday July 31st and Sunday Aug. 1st on the Collins Pine Lawn in Chester CA. “We are overjoyed to be offering this fantastic event again after a break in 2020 because of covid shutdowns,” said Plumas Arts Events Coordinator Jennifer Ready.

The show was first hosted on the shores of Lake Almanor in 1969 by a group of Almanor Basin resident artists. The Almanor Arts Show was “gifted” to Plumas Arts in the early 1980s when the artists that had managed the show since 1969 felt it was appropriate to transfer show management to the county’s new local art agency which had been established in 1981.

When the Almanor Art Show outgrew its original home on the lakeshore, it was hosted for two years adjacent to the Collins Pine Lawn. In 1988, with the support of the Collins Pine management, Caltrans and local law enforcement officials, the show moved to its current home upon the glorious cool and green Collins Pine Lawn with its majestic trees.

In the last three decades Plumas Arts has grown this event into one of the most respected art shows in the region.

Many artists return to this location year after year from all around the Western US. Plumas Arts also appreciates that each year brings new talented artists into the fold. Painters, printmakers and photographers are a featured part of the show. You will also find unique and wonderful pottery, woodwork, fabric arts, jewelry, metal work, furniture, lotions and body products, artisan foods, and more. There will also be food vendors offering lunch/early dinner options and plenty of drinks and treats.

We are pleased to have Hank Alrich and friends performing original and traditional music throughout the weekend.

Plumas Arts was established in 1981 as a 501c3 that serves as the local arts planning and primary programming agency for our county. Since its inception, Plumas Arts has been authorized by the Board of Supervisors to serve as our county representative to the California Arts Council’s State-Local Partnership Program where, through an annual grant application process, they have ranked consistently as one of California’s model local arts agencies.

Plumas Arts’ mission is to cultivate communities in which arts and culture flourish. This small budget, can-do organization continually strives toward that mission and is enriched by a diverse and devoted membership base, dedicated volunteers and a track record of mutually beneficial partnerships. The organization has long standing programs that serve the entirety of Plumas County including arts education programs in every elementary school, events around the county, a gallery featuring local artists, management of the county’s only first run feature film movie business, and the county’s most comprehensive web based cultural events calendar.

To learn more about the work of Plumas Arts visit their website at www.plumasarts.org