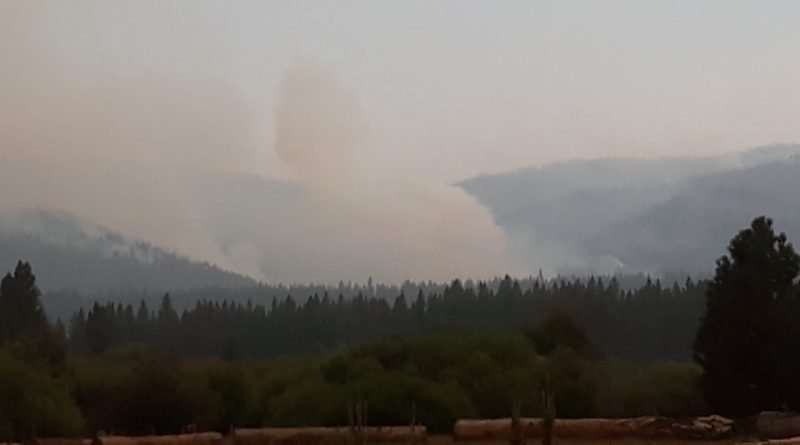 Ask and ye shall receive. Tonight’s community meeting on the West Zone of the Dixie Fire was long on time and information – 90 minutes packed with details.

There was some good news — the fire is holding in a lot of areas and thus far has spared Chester, the Peninsula, the East Shore, Hamilton Branch, Clear Creek, and Westwood. The bad news is that there are roughly 72 hours of unpredictable weather ahead — and there is enough of a threat that those communities will remain under evacuation orders.

We learned tonight that there are 28,000 residents evacuated throughout the fire including Plumas, Lassen and Tehama counties.

Tonight’s meeting was held at the Community Church in Susanville in front of a live audience of evacuees. Following are some of the highlights.

The incident meteorologist said that more thunderstorms are anticipated tomorrow, and the high pressure system that has been in place is breaking up, so the air above the fire will be more unstable. “We will be looking for gusty, outflow winds,” he said. On Monday and into Tuesday, winds are predicted to pick up out of the southwest at 15-20 mph, with gusts up to 35 mph. However even this dire forecast held some good news, the temperatures will cool off. The weather is supposed to quiet down again on Tuesday.

Tuesday is also when a new Incident Management Team will take over on the East Zone, so there will be some new faces to interact with for West Zone members.

What’s happening in the West Zone

Operations Section Chief Mark Brunton presented the most detailed analysis of the fire throughout the West Zone.

“This is a very large fire; it’s a big beast,” he said, but the management team has plans that are being implemented. One of those plans was to stop the fire from spreading into the Mill Creek area of Tehama County. He said if that were to occur, it would probably require the addition of another team, because the potential for growth would be explosive. “You don’t want fire there,” he said. He went on to say that heavy mop up is going on, and the door to Tehama County has been closed.

There is also a lot of heavy mop up going on along the West Shore of Lake Almanor. “ Want to make sure when we return people, it’s a safe environment,” he said. He warned that when people do move back in, they will see smokes (from smoldering trees), but there will be resources in the area to put them out. “It will be an ongoing process,” he said.

That sentiment became clear through the night. As many of the speakers alluded to the fact that this fire will be with us for weeks.

Brunton said that in managing the fire there are plans in place based on what the fire is predicted to do. The management teams try to plan and not simply react. “The fire has made some runs,” he said. “It was pushing and threatening communities … we had plans in place.”

He described the defensive firing that was completed around the causeway to prevent the fire from getting into the peninsula. He said that their planning — including structure preparation and getting to know the neighborhoods — prepares them if the fire were to push into an area. But the firing operation was a success and is now being heavily mopped up. “I’m comfortable we won’t see incursion of the fire into the peninsula,” he said.

According to Brunton, the “other door that was open” to threaten the Almanor Basin was Dyer Mountain, which is on the border with the East Zone and they are working cooperatively. “There is one piece of line that needs to be burned in,” he said. “We have approved a plan with our partners that will close the door and protect those communities.” He called that a huge win, and again heavy mop up will ensue.

On the Lassen sector of the West Zone, Brunton described it has having a lot of challenges and being very complex, particularly in the Warner Valley. He said that he has been fighting fires for 35 years and had never witnessesd what he has this year. While some structures were lost in Warner Valley, others were saved. Two firefighters suffered from smoke inhalation while working to protect structures.

The fire has also moved into the national park and Brunton said they are collaborating with their federal partners.

He too, addressed the couple challenging days ahead. “It’s concerning,” he said. “There’s still a lot of fire out there.” He said that operations section chiefs have put together a solid plan with prioritization. “It’s going to be exciting, not in a good way,” he added.

Sunday will be a heavy work day of opening some lines from last year’s Hog Fire, which he said “happen to be in the right place for what we think we will happen.”

Brunton discussed a lightning strike that started a new fire of about 10 acres, but that copters helped tremendously in containing it. They are also using the large air tankers out of McClellan in Sacramento.

Other news including Westwood and evacuations

Lassen National Supervisor Deb Bumpuss made an announcement for the East Zone to let viewers know that structure assessments are being done in Wilcox Valley, North Arm and Keddie Point. She also announced that there would be no East Zone meeting on Sunday as originally scheduled. Another public meeting will be held tomorrow at 3 p.m. for the West Zone.

Lassen County Sheriff Dean Growden said it was lucky thus far that the fire didn’t come into Clear Creek and Westwood. He said firefighters have “done a ton of work” to prepare the communities but there is still a threat. “Westwood is the longest order I have had in place,” he said of evacuations that he has issued as Sheriff.

“If the fire were to move into Westwood from the North we could get cut off pretty quickly,” he said. There are still people in Westwood and he said officers have gone door-to-door. If the threat becomes immediate officers will drive through one more time with lights and sirens, but then will be forced to leave.

The subject of evacuees not leaving, was addressed by a couple of the speakers including Brunton. He said he understands that people have a civil liberty to protect their property, but when they don’t have the knowledge or the equipment, they put their lives in grave danger, as well as the law enforcement or fire personnel who must try to save them. Local law enforcement is responsible for issuing and lifting evacuation orders.

As for Janesville, it remains under an evacuation advisory. If it becomes mandatory, there is a plan in place to ramp up the law enforcement presence to safely evacuate people.

Plumas County Deputy Chandler Peay wanted to remind people to beware of scams associated with fire relief. He also said that the governor issued a state of emergency for Plumas County on July 23, but the county needs to complete its damage assessment to qualify for more relief.

He said that part of the governor’s order makes it illegal for businesses to engage in price gouging and it’s subject to criminal prosecution.

Finally, Peay said that the sheriff’s office would be arranging escorts into destroyed properties in Greenville, Canyon Dam, West Shore and Warner Valley. Property owners are asked to go to plumascounty.us and answer a series of questions so they can be contacted.

As for the repopulation of the evacuated communities it’s unlikely until after the forecasted wind events.