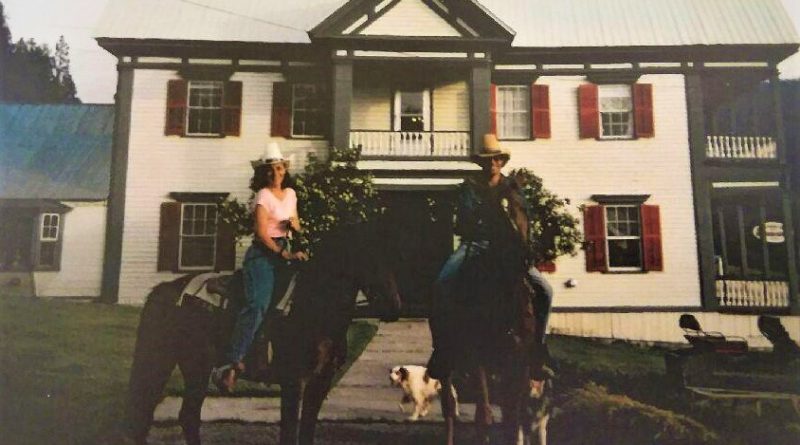 Two riders in front of the West entrance to White Sulphur Springs Ranch, circa 1985. Photo by Paul Bianco
News
May 8, 2022 Editor

He is a frequent visitor at the Mohawk Community Resource Center (MCRC) in Blairsden.  He enjoys using the library, and some of the other conveniences. As it is for so many residents of Eastern Plumas County the resource center is a familiar and important place. In the course of his many visits he got to know the MCRC coordinator, Holly Johnson. After a while, and many conversations later, Holly realized that this guy had an important story to tell. He’s a senior citizen, a long time resident of Plumas County, and a part of the history of White Sulphur Springs Ranch.

His name is Paul Bianco.  Holly arranged for Paul to tell his story to a couple of Mohawk Valley Stewardship Council (MVSC) volunteers.  The MVSC are the stewards of White Sulphur Springs Ranch and Paul’s history took on a special meaning for these people and their organization.

Paul’s grandfather came to Ellis Island from Italy in 1917, probably to escape the world war that was destroying Europe.  Paul’s father was a World War II naval veteran and Paul was born in San Francisco in 1946. The very definition of a baby boomer. He was in his late 30s, on a long horseback ride on the Pacific Crest Trail in 1985, when he stopped for a while in Graeagle. In his words he was “overwhelmed” by the appearance and the ambiance of the community. He saw an impressive looking gent that was striding through the park.  The guy stopped to pick up a piece of trash and put it in his pocket. Paul decided then that he wanted to be a part of this community.  He found out later that the impressive stranger he saw was Harvey West. Being an experienced horseman, Paul stopped at the Graeagle Stables to ask for a job.  Both the horses and the grounds were in terrible shape. He offered to work at the stables in order to improve the conditions and establish himself in the community, knowing that he would someday own this business.  After less than two years working as a wrangler he made the right offer to buy and became the new owner.

The next 10 years saw great improvement at the stables. Paul worked hard to make the customer’s riding experience something special. One of the most popular trips was a ride and an overnight at the then, bed and breakfast inn, White Sulphur Springs Ranch. The following is a quote from the Sacramento Magazine of June, 1987.

“Twice a week throughout the summer, guided groups of about a dozen guests (more than half first-time riders) depart the stables in downtown Graeagle to wind along scenic Feather River country trails and beside the meandering middle fork. Champagne and other refreshments are served along the way and the tired mounts receive carrots dipped in honey and rolled in oats.

Nearly ten miles and three hours from the stables, the troupe arrives at White Sulphur Springs Ranch, where travelers soak their weary muscles in a warm spring fed pool or toss horse shoes in the isolated meadow, while chefs prepare the evening’s steak barbecue.

After breakfast the next morning the group heads home (sandwiches and wooden tubs of drinks await lunchgoers at a picnic table in the pine forest along the way), arriving at Graeagle by noon.  Cost of the trip, meals and lodging included, was $165”

Paul Bianco had turned the dilapidated Graeagle Stables he found in 1985, into a successful tourist attraction and an important chapter in the history of WSSR. He sold the business ten years later, in 1995.

During the time of Paul’s ownership of the stables the complex at White Sulphur Springs Ranch (WSSR) included a hen house, a bunk house, a blacksmith shop, a carriage house and at least two other structures besides the main ranch house.  The resident managers were Judy and Jim Cowen.  The property was owned by Don Miller and Linda Miller Vanella.  In Paul Bianco’s memory these two siblings did not get along and due to poor management, the bed and breakfast venture failed. The property was finally sold in 2003.

It quickly became apparent that the new owner was not interested in restoring or even maintaining the historic property.  Some of the outbuildings were destroyed and the big main house was in the process of being dismantled.  At that point a group of dedicated residents formed the 501(c)(3) public benefit, Mohawk Valley Stewardship Council (MVSC). The destruction stopped and the renovation began.

Paul Bianco’s experience with WSSR reminds us of what an important part of the community it used to be.  The story of his relationship with WSSR, brings Plumas County history to life and shows us how the return of the functioning ranch can add to the quality of life in the  community.

The MVSC is in the middle of a fundraising campaign called “Build a Legacy, Brick buy Brick”. Begun in 2016, the idea is to sell concrete bricks, inscribed with a message, that will become part of the landscape at WSSR. To date over 200 bricks have been installed near the entrance to the old ranch house.  The Board of Directors of the MVSC has decided to donate a brick to honor Paul Bianco’s connection to WSSR.  The inscription will read “Paul Bianco, Graeagle Stables 1985-1995”.  The figure of a horse will accompany this text.

Bricks can be ordered from a brochure located on site near the brick display. They are also available via the website at www.whitesulphurspringsranch.com or by contacting chairperson, Janet Reihsen, either online, at [email protected] ,or by phone, at 530-836-2495. The mailing address for the MVSC is PO Box 25 Clio CA. 96106.

For more information about the MVSC, its organization and goals, go to the website. To be a part of the process of restoring the historic ranch, contact the volunteer chairperson, Judy Porep-Lullo at 530-836-0254.