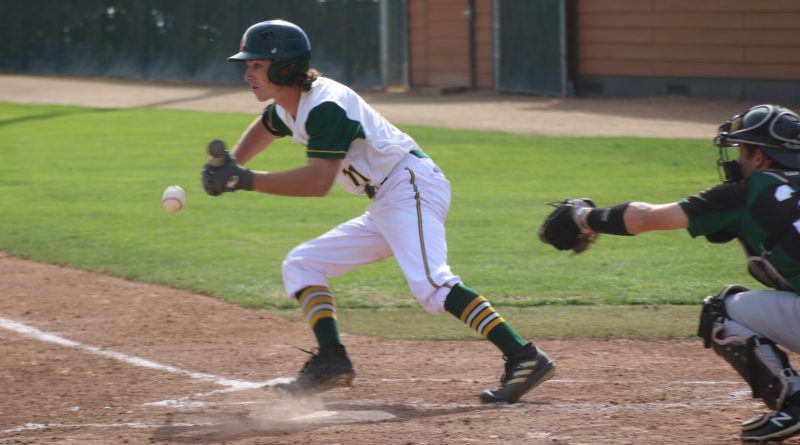 Freshman Cooper Kitrel, no. 11, is displaying a bunt in the 4th inning April 8 as the Eagles host the Knights in Quincy. Kitrel has scored 28 runs and is batting .571 this season. Photo by Mari Erin Roth
News Sports
April 8, 2022 Editor

Feather River College baseball is circling the top of the mountain in 2022. Longtime head baseball coach Terry Baumgartner has again put together a winning team. The Eagles are 23-7 overall and 14-1 in conference play with just 9 games left in the league season. They are in the midst of a home game today, April 8, with the Shasta Knights. They host the Knights again tomorrow for a doubleheader, April 9, at noon and 3 p.m.

Three games follow with the Redwood Corsairs, 2 games with the Butte Roadrunners and 2 games with the Lassen Cougars before playoffs. The Eagles have faced all these teams already this season but you never really know what is going to happen on a given day; the score isn’t known until the teams are walking off the field.