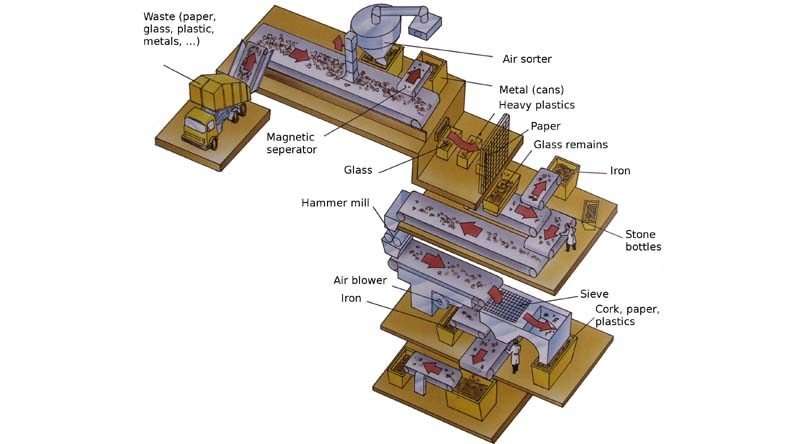 Plumas County produces 18,300 tons of solid waste annually, or about a ton per person living in Plumas County.

Most of the waste ends up being hauled 100 miles and buried in the Lockwood Regional Landfill, located east of Reno.

Only about 25 percent of this waste is recycled.

This may be about to change; the county is under increasing pressure to reduce the amount of material going into landfills.

In a county solid waste taskforce meeting Jan. 23, the county and Ricky Ross, vice-president of Intermountain Disposal, discussed opening a materials recovery facility, which could greatly increase the amount of solid waste recycled in Plumas County.

Ross said, “We feel that a materials recovery facility is the future of our county’s solid waste system. It will be located in Plumas County, Lassen County or somewhere else.”

John Kolb, an engineer with Plumas County Public Works, agreed, “I’m a big proponent of a recovery facility myself. If more people knew about it, it would garner more support.”

This project, if it goes ahead, would be a partnership between Intermountain Disposal, one of two companies contracted to haul solid waste in the county, and Plumas County.

Bob Perreault, the county’s director of public works, pointed out that before the 1970s all refuse was taken to private landfills where it was burned out in the open

One of these landfills was located near the summit of Radio Hill, the hill between Quincy and East Quincy. Other landfills were located on Gopher Hill Road in Meadow Valley, in Chester and in many other locations throughout the county.

In 1965, with passage of the Solid Waste Disposal Act, the federal government, and eventually states and counties, started to move toward better ways of disposing of solid waste.

However, adoption of new standards was slow countrywide and a lot of trash was dumped onto farmlands, in forests and along roads.

In the 1970s, society became more aware of the impacts of landfills on air and groundwater quality, on potentially explosive methane gases and on wildlife. At the same time, dust, smells and noise from landfills were lowering local property values.

Plumas County, for its part, developed its first comprehensive solid waste plan in 1978.

In 1989, state law required all counties to prepare a much more comprehensive “County Integrated Waste Management Plan” with a mandate to increase the amount of recycling to reduce the amount of solid waste going into landfills.

Only downtowns Quincy, Chester and Portola currently have curbside recycling.

In these locations, people have to understand what material is recyclable and what isn’t, which can be complicated, and be willing to take the time to separate their waste.

Most county residents, 75 percent, don’t have curbside recycling. Most people have to store their recyclable material somewhere and then take it to one of six county-owned transfer stations located in Chester, Delleker-Portola, East Quincy, Graeagle, Greenville all year and in La Porte in the summer.

La Porte has no recycling at all.

With a materials recovery facility, Public Works estimates that percentage of solid waste that gets recycled could go from 25 percent to over 50 percent almost immediately.

The California Legislature and Governor Brown have set an ambitious goal of a 75 percent recycling rate by 2020 through recycling, composting and reduction of excess waste in manufacturing.

Keeping carbon-based organic matter out of landfills would also reduce the production of methane, a potent greenhouse gas, emanating from landfills.

When Public Works officials were asked if recycled materials from curbside and other recycling programs actually gets recycled, or just thrown away, they responded that people wouldn’t be paying for recycled material and paying to transport it if they weren’t planning on using it.

Most solid waste is currently collected by Intermountain Disposal and Feather River Disposal, the latter owned by Waste Management, under separate contracts with the county, the city of Portola, the Chester Public Utility District and the Quincy Community Service District.

Those companies dump their loads into large long-haul trailers at the counties six solid waste transfer stations. Those trailers are then trucked to the Lovelock Regional Landfill.

Recyclable material is collected in other long-haul trailers at the transfer stations and driven to primary recycling plants located in either the Central Valley or Susanville, depending on the current price offered for recyclable materials.

Feather River Disposal has its own system for collecting and transporting recyclable materials.

Transportation and tipping fees are the major costs of disposing of solid waste.

Tipping fees are the fees charged for dumping solid waste into landfills or recovery facilities.

Intermountain Disposal and Feather River Disposal pay those costs and are then reimbursed by the county, city or special districts.

Contracts are currently being renegotiated between the county and the disposal companies. Those contracts are nearly ready for approval.

Intermountain Disposal has already purchased property for a resource recovery facility in Delleker and has obtained a county special use permit to build the facility.

Ross noted that the county has to decide if it wants to build the facility and said he needs to see if he can build a smaller version of a material recovery facility to keep tipping fees low.

Perreault agreed with Ross, “It is time to meet with Ricky to get a better handle on what he is proposing, so that we can move forward with it. Ross needs to determine the tipping fee for use of the facility.”

Ross and Perreault agreed to meet soon concerning the facility, once contract negotiations are over.

Kolb reported that there is a possibility that Sierra County might be interested in using a future materials recovery facility in Delleker, as its landfill is rapidly filling up.