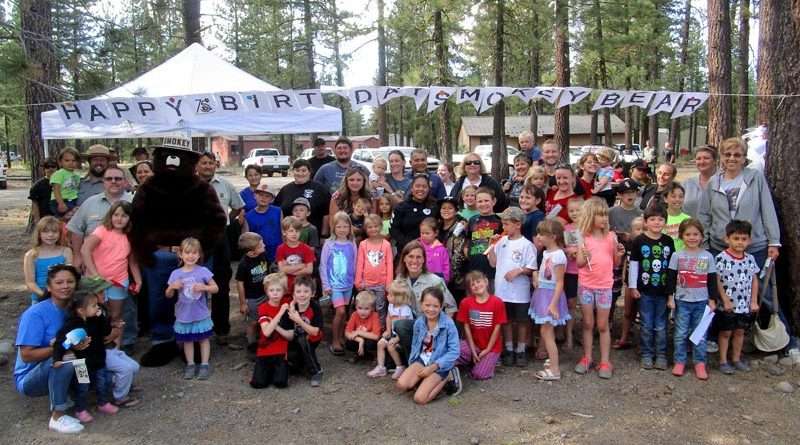 Here are a few of the people who came out to celebrate the 75th birthday of Smokey Bear on Aug. 9. There were games, birthday card creation stations, photo-ops and, of course, birthday cake for all to enjoy. Photo by Gregg Scott
News
August 21, 2019August 28, 2019 Gregg Scott, Staff Writer

Aug. 9 was the 75th birthday of Smokey Bear and across the nation USDA Forest Service facilities along with many other well-wishers threw him a birthday party.

As residents and visitors arrived there were games for the kids, birthday cards to color, photo opportunities for all and of course birthday cake.

Plenty of staff were on hand to help everyone enjoy the activities and of course help celebrate.

For those that don’t know the history of Smokey Bear, he was “born” Aug. 9, 1944, as a joint concept of the U.S. Forest Service and the Ad Council to have a fictional bear as the symbol for a national forest fire prevention ad campaign.

The original poster image of Smokey was created by artist Albert Staehle. It illustrated Smokey pouring a bucket of water on a campfire and a caption saying, “Care will prevent 9 out of 10 fires.”

As Smokey became more and more popular his image began to appear on a wide variety of forest fire prevention materials.

In 1947 Smokey started using the new slogan, “Only YOU Can Prevent Forest Fires!” which became very well known and was used until it was changed to “Only you can prevent wildfires” in 2001.

Smokey has been a national celebrity for many years with his likeness appearing on billboards, postage stamps and even hot-air balloons.

As coincidence would have it after the Smokey image had become quite well known, in the spring of 1950, during a fire in the Capitan Mountains of New Mexico, a young black bear caught in the burning forest climbed a tree trying to survive.

He did stay alive, but was badly burned and was named Hot-Foot Teddy. The roughly six-week old cub was brought to New Mexico Game and Fish Officer Ray Bell who was a pilot and flew him to a Santa Fe veterinarian for medical attention.

Bell then brought the cub home where he and his family nursed him back to health over a two-month period.

With the bravery and audacity of the little cub to overcome his injuries Bell thought he was the “living embodiment” of the fire prevention program created by the U.S. Forest Service and renamed him Smokey.

As the news about this real life bear named Smokey spread across the country, he was soon given a new home at the National Zoo in Washington, D.C., where he grew to be a 400-pound black bear.

Real life Smokey died in 1976 and was returned to Capitan, New Mexico, where he is buried in the State Historical Park, but the image and message he has spread are both timeless.