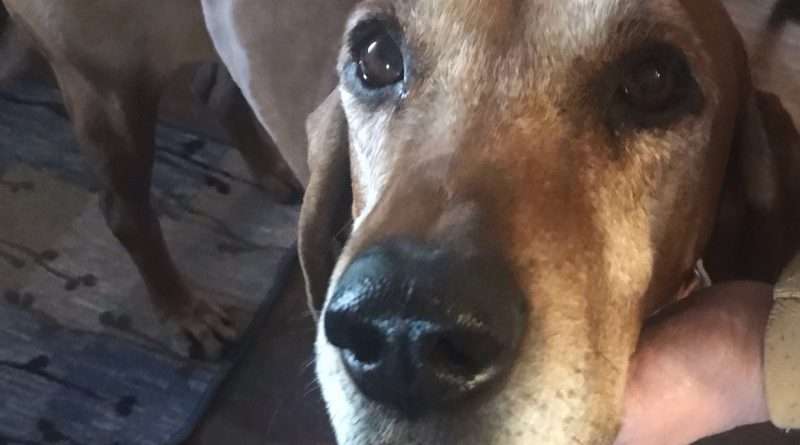 This is Red, who seemingly roves the streets of Portola looking for his master, who is now deceased. Photo submitted
News
January 13, 2022January 18, 2022 Editor

The snow has turned to a slushy, unpredictably icy layer of mess on Highway 70.  In Portola the huge middle of the road berm from the last snowstorm is slowly, methodically being removed and dumped outside the city limits.

I see a shape ahead, weaving in and out of traffic.  The shape is a beautiful golden rust, red color, just like my Vizsla, Max, who is warm and safe, 5 miles down the road at home.  The shape is a large, floppy-eared dog, nose to ground, completely oblivious to the chaos starting to emerge in his wake.  Cars stop just in time to avoid hitting him.  Cars inch along past the KS Market where a woman getting gas runs out into the road, herself oblivious to traffic, to try to get him at least back onto the sidewalk.  It works.  I see the dog lope casually up a small snow berm outside of the old, abandoned Log Cabin restaurant.  I pull over.

I use my most soprano “pup pup” call that always works to get my two hounds’ attention.  It worked.  He allowed me to approach and get ahold of him by his yellow collar.  I needed my glasses to read the tags so he willingly, yet cautiously agreed to join me in my vehicle, his nose always testing the waters first.

His tags were worn and the lettering barely visible, but I discerned a phone number.  I called the number repeatedly, each time changing the configuration to with/without the “1” or the area code, but every attempt got the response “Your call cannot be completed as dialed” Verizon’s generic code for “there’s no one home there anymore.”  I scratched at the tag some more which revealed both the dog’s name, it’s Red, and his owner’s name, Brian Hudson. I decided that my only option was to take Red back to my house for further investigation.

After leaving messages at High Sierra Animal Rescue and with the shelter in Quincy and with the veterinarian listed on Red’s rabies vaccination tag, I googled Brian Hudson where I found a solid connection between Red’s dog tag data and the infamous Bank Club in Portola.  Then I texted my neighbor, a Portola native, to see if he had any leads.

This is how the story of Red unfolded from the sources I spoke with:

I very much sympathized with her dilemma.  I know hounds and hunting dogs very well. They are my favorite breeds, but once their nose gets ahold of something they’re looking for, the nose is 100 percent  in control.

I told her, with a nod to Red’s well-cared-for but emaciated state, that I had given him some of my “home cooking.”  She acknowledged his condition, informing me further that Red had been extremely depressed ever since her father, Brian had died.

It dawned on me that Red was looking everywhere for Brian.  My heart exploded. This was a retelling of the story of Hachiko, the dog that waited at a Japanese train station for his deceased owner every single day until Hachiko died on the spot. A monument is erected at that train station in his honor.

I never knew Brian Hudson.  I knew of the Bank Club in sort of a vague, slightly edgy way.  But although Brian Hudson and I never spoke, the devotion of his dog Red spoke volumes about the man. A dog’s assessment of a man is all I need to know about him.  I know Brian Hudson was a good man. Red told me this in no uncertain terms.

Now Red is Portola’s dog.  He will never be happy anywhere else but where he and his master walked, sat and talked with anyone who stopped or passed by The Bank Club.  Watch out for him.  Sometimes he may need a gentle distraction from his search for a memory that will in time fade as all scents do.  Sometimes he might need a kind word or shooing out of the dangers of traffic and back to the safety of his home. Take a minute to give him a pat and a big, “Hello Red” if you see him on the road.  Let him know you care and that like him, you remember. You can’t miss him.  He’s Red.