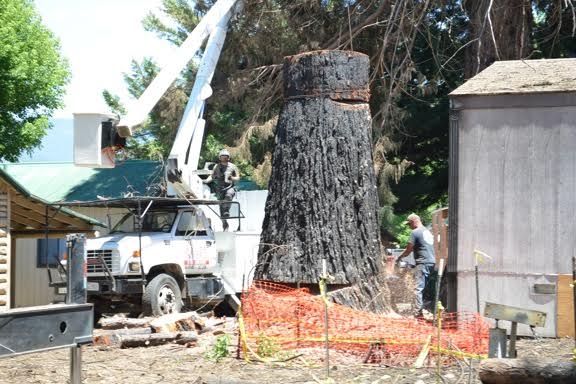 A line of three sequoia trees fondly known as the Three Sisters have stood sentinel between mobile homes and cabins in the American Valley Mobile Home Park on Lawrence Street in Quincy.

But on the afternoon of June 28, despite temperatures of 100-degrees plus, Jimmy West Tree Services crews and equipment were out bringing them down.

Two of the Three Sisters were badly burned during a nearby mobile home fire this spring. West was contracted in order to cut the fire-damaged trees down before the giants had an opportunity to harm neighboring homes or vehicles.

A call was put into a forester with CalFire to see if anyone has an age estimate on the sisters, but he wasn’t able to respond.