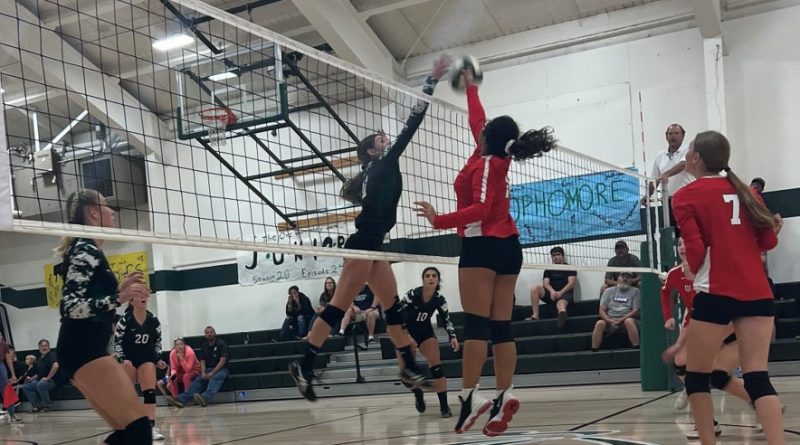 Magali Neilson, QHS No. 10, shoots into the air to block the Chester attempt by No. 11 Gianna Tantardino, at the net. QHS Shelby Nussle, No. 7, is ready for cover. Chester Faith Oswold is No. 10 in black, No. 20 is senior Rylee Rhoads. Photo submitted
News Sports
September 30, 2022 Editor

The Quincy and Chester girls made a real contest of their volleyball match Sept. 27 on the Volcano home court. The tight duel ended with the Trojans victorious over the Vols, 3- 2, but the game scores tell a better story. Game one was won by the visiting Trojans, 25-9. Game two went to Chester 25-21. Game three, 25-20 for Quincy, and game four was 25-22 for the home hosting Volcanoes. The tie-breaking duel ended 16-14 for QHS. “Tonight’s match with Chester was thrilling to watch!” said QHS head volleyball coach Rebekah Grammar. “Both teams came out with 100 percent effort. QHS is on a hot streak!”

The Chester team stats were in, so here they are: Junior Gianna Tantardino led the Vols with 12 kill shots. Senior Faith Oswold landed 6 kill shots, and seniors Ava Townsend and Rylee Rhoads both fired off 5 kills each. Sophomore Sarah Branch brought in a kill shot, also. Oswold aced three of her serves. Two was the magic number for most the serving Volcanoes; a pair of aces were delivered by Townsend, Tantardino, Branch, and Rhoads. Tandardino led defense with four blocked shots. Freshman Addison Nashlund and Townsend both contributed blocks. Townsend got in the most digs, five, with Tantardino getting two, and one each for Rhoads and Oswold. Branch handled the ball the most with 23 assists and 107 attempts. Top serve receivers for the Volcanoes were Oswold (6), Townsend (5), Tantardino (5),and Nashlund (2). Rhoads sent one QHS serve back to the Trojans.

Quincy stats were not posted but a few comments from QHS supporters include, “With only 7 players, the Quincy Trojans dug in their heels and refused to go away without a win,” said Tracy Weaver. “It appeared to some that the games were won on a particular side of the court, so on the 5thset the coin toss was done again. Usually teams pick serve over side, but not this game, Chester gave up serve for Q to have the side neither team had won on.”