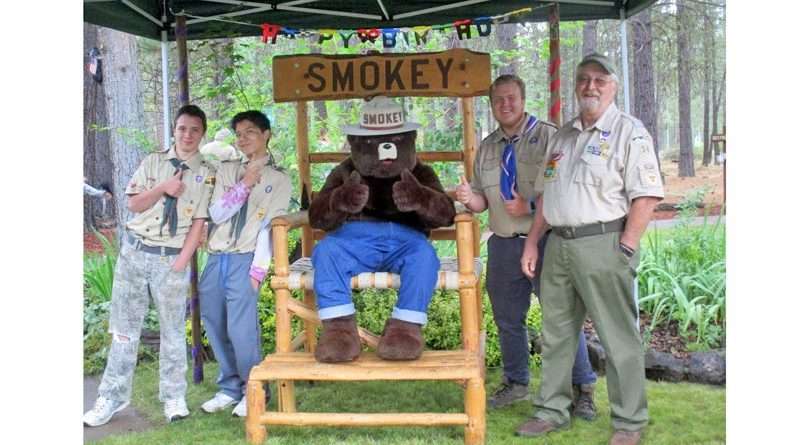 Each month Scouts from Chester Boy Scout Troop 36 plan an adventure outing as part of their annual calendar.

Granted some of those plans are thwarted from time to time due to illness or weather, but nothing was going to deter the troop from its last planned campout.

The plan was to travel from Chester to some private acreage on top of Hatchet Mountain just west of Burney. It one of the favorite spots for the Scouts mostly because there are no other campers to contend with and it has a creek running right down the middle.

They were also going to stop along the way and partake of the birthday celebration for Smokey Bear at the Hat Creek District Ranger Station.

The weather forecast for Saturday, Aug. 10, was for a chance of scattered rain showers in the Burney area.

Thanks Weather Channel. The rain commenced right around the Bogard Visitor Center on Highway 44 and continued until Old Station.

Photos with Smokey, a great presentation by the Shasta Wildlife Rescue & Rehabilitation folks, up close and personal with several raptors and Sundance the turkey vulture, games and of course some birthday cake.

Back on the road and within minutes the downpour begins again and continues all the way to the final destination.

Aha, another break, just long enough to set erect an e-z-up canopy and a tarp over the cooking area; then more rain and hail for about three to four hours.

The up side was good conversation and “read ‘em if you got ‘em.”

The rainstorm finally subsided about 4:30 in the afternoon and the boys said they wanted to complete the service project they had planned while it was light and the ground was wet.

The project was to replace the rotten lodgepole posts of the safety railing along the edge of the creek bank with some new heartwood cedar posts that would be stronger and last much longer.

Perfect timing Scouts, about three hours of digging new postholes and lashing the rails in place brought the group right up to dinnertime.

Cheeseburgers, fresh fruit salad and s’mores for dessert were a quick and delicious repast.

A little later reveille was well earned by the boys and a breakfast of bacon, eggs and blueberry pancakes was a hardy start to the most beautiful, fresh smelling day imaginable.

Off to one of their favorite fishing spots on Green Burney Creek and the angling challenge begins. These Scouts are definitely learning, this year it was a limit for all.

Then back to camp for lunch and some leisure time, which did include some naptime for the worn out troop.

Right after a breakfast of rainbow trout and sourdough French toast, the Scouts disassembled camp and with everything stowed safely in the trailer headed back toward Chester and home.

As an after thought, it was generally concluded that the rain on Saturday was actually a blessing in disguise. The ground was soft for the project, everything was clean and fresh, and the next morning was absolutely magnificent.

Adventures like this are what the Scouting experience is all about; education, meeting new people, outdoor skills, great food and leadership training that will last them the rest of their lives.