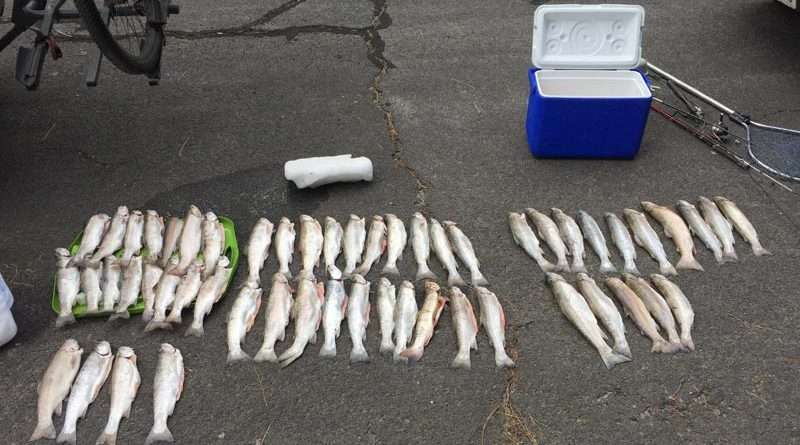 Yaroslav Pugach, 48, from Antelope, had been fishing the trout opening weekend near Antelope Lake on April 28 resulting in this over-the-limit catch of trout. He was recently convicted of gross over-limit of trout in Plumas County. Photo courtesy of California Dept. of Fish and Wildlife
News
December 18, 2019December 24, 2019 Staff

But provides tasty meal for animals

Animals at the Lake Tahoe Wildlife Care facility enjoyed a fish feast Dec. 11, courtesy of the California Department of Fish and Wildlife.

Bear cubs, a family of raccoons and a bald eagle dined on trout that had been illegally poached in Plumas County.

Wildlife officers investigated a possible poaching call from the public regarding a suspected gross over-limit of trout, near Antelope Lake on April 28.

The concerned angler called in a tip about a man, later identified as Yaroslav Pugach, 48, from Antelope, who had been fishing the trout opening weekend near Antelope Lake.

One of the two responding officers spotted the vehicle and stopped it. Despite the suspect’s claims of only having five trout in his possession, the two officers located 54 trout — many times over the daily bag limit of five trout per day and 10 in possession. The trout were very large, averaging 2 to 3 pounds each. The officers cited the man for a gross over-limit of trout.

Wildlife officers filed the case with Plumas County District Attorney David Hollister who prosecuted the case and asked the court for an enhanced penalty due to the excessive over-limit. Pugach was convicted of the over-limit of trout charges, ordered to pay $4,965 in fines, and was ordered to serve two years of probation.Part of his probation terms included no fishing for two years.

Rather than wasting the seized evidence trout from this case, they were donated to the wildlife facility. The facility often partners with CDFW in accepting and rehabilitating injured or orphaned wildlife, ultimately preparing them for re-release back into the wild.

Anyone who witnesses a poaching or polluting incident, or have information about such a violation, can call the toll free CalTIP number, 888 334-2258, 24 hours a day, seven days a week.