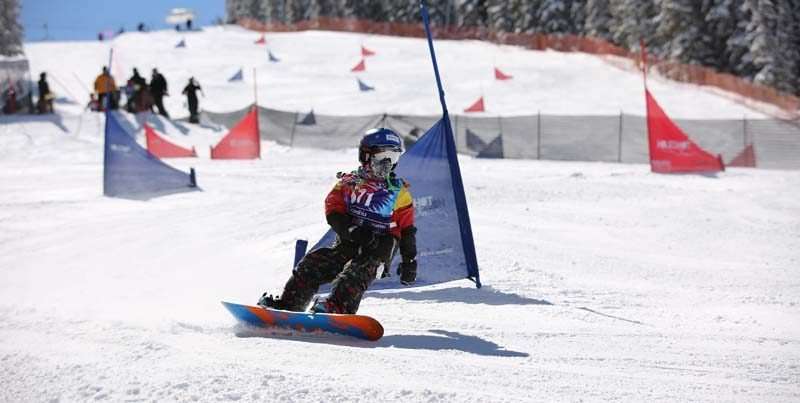 Six-year-old Matthew Laboda carves a path as he attacks the gates on the slalom course at the national finals. He earned a seventh place national ranking for his efforts during the April competition.
News
May 29, 2017May 26, 2017 Staff

Two Chester Elementary School students traveled to Copper Mountain, Colo., to compete in the National Finals Competitions for the United States of America Snowboard and Freeski Association in April.

Nine-year-old Adam Laboda and his younger brother, 6-year-old Matthew Laboda, have been snow boarding since each was about 2 years old.

Their skill levels have increased over the years until they are now competing in the top levels of their age groups.

Both boys chose to compete in all of the freestyle events, slopestyle, halfpipe and railjam, as well as alpine events,slalom, giant slalom and boardercross.

When the overall standings were tallied, Adam Laboda had earned fifth place in the National standings for his age group and Matthew Laboda took seventh place nationally in his.

The boys are the sons of Filip Laboda of Chester and are being coached by Scott Harris, Ally Carroll and Colin Darcy, who are affiliated with the Tahoe Select Snowboard Team.