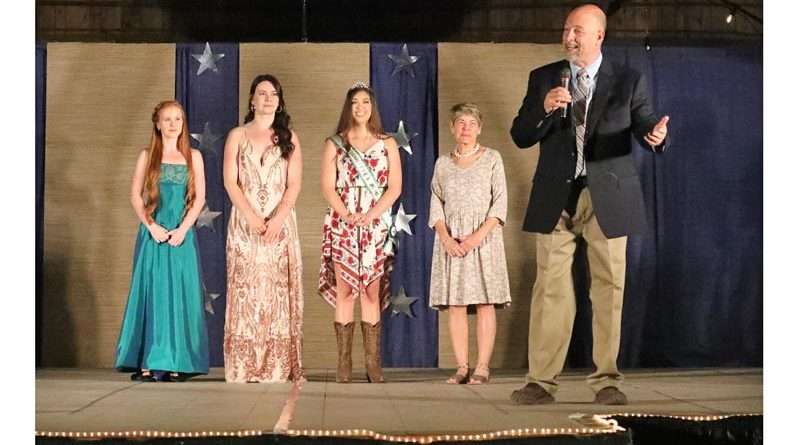 Plumas-Sierra County Fair Manager John Steffanic introduces the two candidates for the 2018 Sweetheart of the Mountains: Grace Bristol, far left, and Rebecca Leonhardt. The 2017 Sweetheart Madeline Williams, of Loyalton, center, attended the event and talked about her plans for the future. Also shown is pageant organizer Nancy Gambell.
News
May 11, 2018May 10, 2018 Debra Moore, Managing Editor

Sharing their talent and poise, two candidates — Portola High School junior Grace Bristol and Quincy High School senior Rebecca Leonhardt — vied for the title of 2018 Sweetheart of the Mountains on Saturday, May 5, at the Plumas-Sierra County Fairgrounds.

The competition was interspersed during the Rhythm & Grace Dance Studio Revue, but the results won’t be announced until the county picnic June 2. The delay will give the girls more time to raise funds for the fair foundation as well as their own scholarships. How much money they raise is factored into their overall score.

For the poise section, Grace Bristol went first and was asked to describe her definition of success.

Bristol said that she defined it in two ways — gaining knowledge, which is why she has always admired doctors and wants a career in the medical profession, and by practicing perseverance to achieve a goal.

Leonhardt was asked where she saw herself in 15 years. She said she planned to find her passion and pursue it and “have a family that loves me.”

For the talent section, Leonhardt stood on stage while a video played showing her doing hair and makeup of a friend for prom.

Bristol showcased her talent by playing a piece on the violin.

The girl named Sweetheart will be visible at the Plumas-Sierra County Fair and at other events.

Last year’s Sweetheart, Madeline Williams of Loyalton, addressed the crowd at the beginning of the competition. She is finishing her senior year at Loyalton High School and plans to study political science at Santa Barbara City College on her way to becoming a lawyer.

Grace Bristol is a junior at Portola High School. She is active in 4-H and has had the Reserve Champion Lamb for two years, as well as winning 1st Year and Senior Showmanship. She has won the Rotary Speech Award and has been a member of the Gold Honor Roll/Honor Society for four years. Grace is very active in the community, helping with many fundraising functions for various organizations. She has served as 4-H president for Las Plumas 4-H and has helped with activities such as planting flowers at the hospital and walking dogs at the animal shelter. She plans on attending college and earning a degree in neurology for a career in medicine.

Rebecca Leonhardt is a senior at Quincy High School and 4-H member since she was 5. She plans on attending Chico State in the fall and earning a degree in business or anthropology. Rebecca holds several honors in 4H including 2011 County Horse Winner, 2012 medalist for horse, 2016 Reserve Champion Steer and the 2014 Round Robin winner. Recently, she held a fundraising dinner as her senior project and donated the proceeds to the American Valley 4-H Club. She has also volunteered for special events conducted by the Plumas District Hospital Foundation.