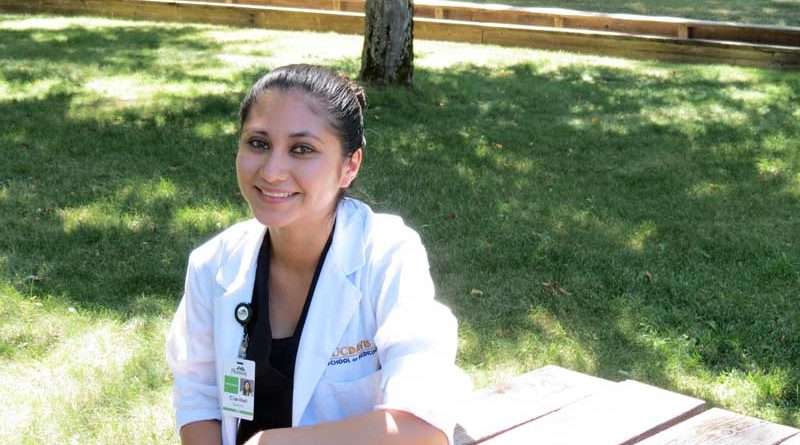 Claribel Solorio is a student-athlete who attended college on a track scholarship and now her love of sports might influence her career path.

The third-year medical student from U.C. Davis is coming to the end of her rotation in family medicine at Plumas District Hospital. And while she initially leaned toward that field, she now thinks she might want to work with athletes.

“They are very motivated to return to their sport,” she said, so they work with their doctors to heal as quickly as possible. But she’s also considering surgery with “its immediate gratification of fixing something.”

Now is the time in her medical school career to consider her options as she rotates through a number of fields. Next up is ob-gyn, then surgery, then pediatrics and finally psychiatry.

While in Quincy, Solorio has worked with Drs. Ross Morgan, Joey Schad, Paige Lewis and Jeff Kepple, and liked observing their different patient interaction styles, as well as the variety of treatment opportunities that arise while working in rural medicine.

Just four years ago, Solorio’s sights were set on becoming a physical therapist; medical school wasn’t a consideration. But as she took classes to pursue physical therapy, she found herself in many of the same classrooms as the premed students. And she was doing just as well as they were.

“By junior year, I was still with my pre-med friends and doing well. I thought ‘maybe I can do this.’” Even as she prepared her application for physical therapy school, the thought of “med school kept coming back.”

She credits her dad with helping her make her decision. “We went on a run to talk about this and I told him everything,” she said. “He made me believe that I could do it.”

She applied to a number of schools, but selected U.C. Davis for its rural prime program that focuses on the underserved. “I want to give back to the community,” she said.

Solorio comes from the small mountain town of Mammoth Lakes where she grew up with a real sense of community. And that’s what she has found in Quincy.

“All of the physicians here are seen as community members,” she said, and talked about Dr. Schad coaching soccer and Dr. Kepple playing music with his family at various events.

As she posted pictures of her experiences on social media she said her fellow medical students say, “I’m so jealous of your life right now. …”

Solorio is headed back to U.C. Davis for four weeks and then on to Bishop, where she will complete a rotation close to her hometown.

“She has been a star here,” Dr. Kepple said.