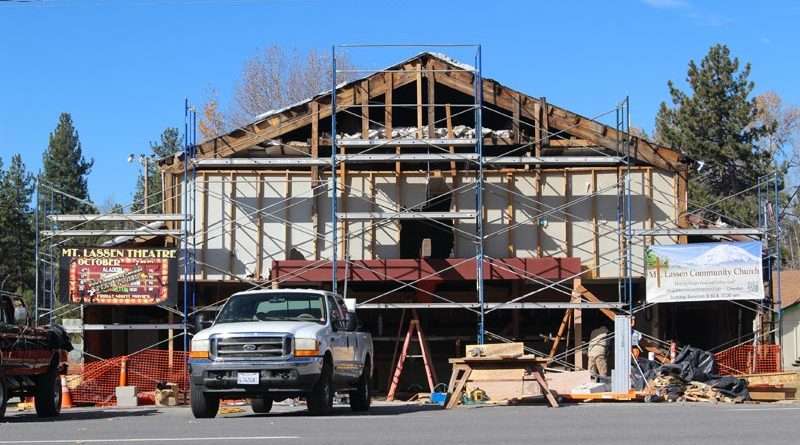 Despite some delays, Mt. Lassen Theatre in Chester continues with ongoing renovations, including a new facade along with interior upgrades such as a modernized concessions area and the eventual installation of a new marquee. Photo by Stacy Fisher
News
November 6, 2019November 13, 2019 Stacy Fisher, Staff Writer

“I love it when you go to see something, and you enter as an individual, and you leave as a group. Because you’ve all been bound together by the same experience.”

Despite a series of delays, Mt. Lassen Theatre in Chester has resumed ongoing renovations, including the construction of a new facade along with interior improvements and a number of other upgrades.

The long awaited marquee and vertical blade, manufactured by Alpha Architecture of Sacramento and paid for through the generous support of theater patrons, was recently delivered and placed in storage, with plans to install the components sometime in the coming year.

Gwen Meinhardt, the theater’s executive director, said the former Chester Theater building (1948-1986) has already been transformed with a modern Dolby Atmos surround sound system that was installed over a year ago, boasting 13 speakers positioned throughout the theatre for “sound you can feel.”

In addition, Galaxy Luxury Sparks IMAX Theatre in Reno donated several hundred high-back, all black leather rocker-style theater seats. Because she values the history of the original theater, she said she planned to retain a small number of the older seats in the final version of the floor plan, but have them completely restored.

A brand new, larger-size popcorn maker located in the main lobby area replaced a smaller version, which means shorter wait times for theatergoers, she said, along with a wider selection of candies.

“A Film has the potential to kindle such a spark of inspiration in an individual that it can alter the course of human progress.”

Meinhardt said that additional improvements are intended to include ADA-compliant double doors on each side of a new art deco box office design with push button accessibility, plus a reduction in the steep grade from the street to the entryway to improve winter drainage.

Re-leveling of the interior floor at the entrance together with raising the current lobby and concession area ceiling is currently underway.

One day she hopes that the ceiling in the theater itself would be raised to make room for a mezzanine or second level of seating to provide space for additional attendance.

A special opportunity being offered by Meinhardt is to have your name engraved on bricks to be inlaid in an Art Deco terrazzo in front of the theater by donating $500 or more.

The timeline until all the planned upgrades are completed is not carved in stone, but likely will take additional resources over the course of several months or even years.

“We need to see ourselves projected in other members of our species to understand ourselves. Cinema is that mirror. It is a bridge between the others and us.”

Meinhardt remarked on the theater’s website, “From the latest Hollywood blockbuster movies, to dramas, performances, events, and music concerts, Mt. Lassen Theatre brings the heart of entertainment to the Mountains of Lake Almanor.”

Located at 200 Main St. in Chester, the theater has weekly showings every Friday night at 7 p.m. A suggested $5 donation at the door is used to help with renovations.

However, during the current construction phase, Mt. Lassen Theatre is closed until further notice.

For more information on the nonprofit theater, to donate (tax-deductible), provide feedback, to reserve the use of the interior stage for performances or concerts, and for scheduled show times and movies go to: www.mtlassentheatre.org. Phone: 258-3009. Email: [email protected]

To make a donation toward the completion of theater restoration efforts visit the GoFundMe website at: www.gofundme.com/mt-lassen-theatre-accessibility .