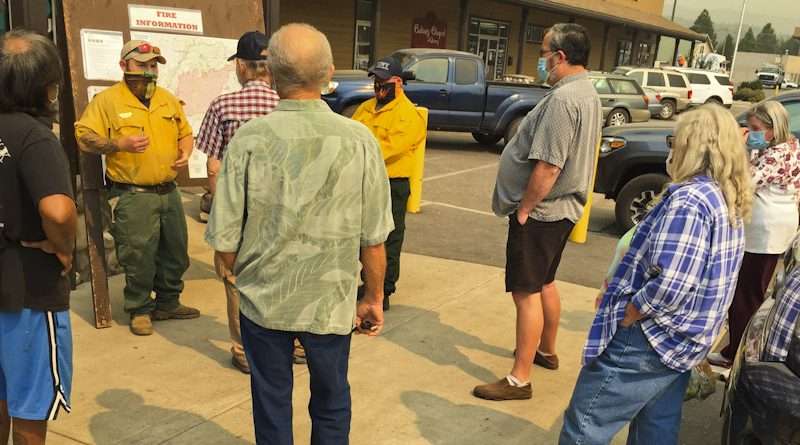 The automatic doors of Quincy’s Sav-Mor Foods opened and closed as shoppers with masks and reusable bags came and went Sept. 17. But it wasn’t just any day.

It was the 30th day of the North Complex Fire that began as the Claremont and Bear Fires when lightning struck Aug. 17 outside this town of 5,500.

Near the stacked shopping carts, two dedicated public information officers with the U.S. Forest Service (USFS) stood at a posted map of the North Complex that now stretches across more than 284,000 acres in Butte, Plumas and Yolo counties.

As two of the 3,000-plus fire personnel assigned to the disaster, the forest service PIOs answered questions as local residents stopped for an in-person and socially distanced update. It was a welcome opportunity to talk directly with emergency personnel about concerns and to hear news of the crews whose heroic work is honored and appreciated with countless thank-you signs all over Plumas County.

The USFS officers are a long way from their own homes. PIO Jon Perry’s cap indicated he is assigned to the North Complex Fire from the Virginia Department of Forestry. The cap worn by his colleague, PIO John McCormack, revealed he is here all the way from FDNY, the New York City Fire Department. Both men expressed commitment to their public service and a genuine desire to help local communities enduring fire incidents of all types.

As shoppers paused, listened and posed questions, an air of reassurance floated through the group.

Perry provided an update on the operational focus and structure-protection efforts. He talked about the effects of wind on perimeters and how fire crews are responding to the changing conditions.

Resources for the Meadow Valley area and surrounding communities, as well as the Onion Valley region, are “an absolute, primary focus,” Perry said, explaining there are “spots” within the North Complex incident that are hot enough to start other fires and vigilance is a priority.

McCormack explained the importance of being alert for the two stages of warning notifications that all fire agencies use to protect people and properties — the advisory warning and the mandatory evacuation notification.

“Your life is more important than anything else,” he said, agreeing with his colleague that fire agencies hope residents use the warning notice to make informed decisions and prepare in advance to leave their properties.

If and when a mandatory evacuation notice is issued, McCormack added, “For everyone’s safety, we don’t the roads to be packed with our emergency response resources and people trying to get out” (long after they should have evacuated).

A fair amount of the conversation with interested locals centered on preparedness and fuels reduction, a topic of serious interest here in our deeply forested communities.

“We preach defensible space,” PIO Perry told the group. “There’s a lot of science behind that.”

Most folks in the region are aware of the need for and advantages of maintaining defensible space of at least 30 feet or more around their homes. Some in the audience talked about their efforts and said how difficult it is to keep up with the necessary work as they get older, so they bring in help.

The PIOs encouraged their listeners’ efforts and urged them to also pay special attention to the availability of “fine” fuels like pine needles, brush, grasses and other little dry fuels that can collect under steps and decks, in corners on porches after a windy day and in other forgotten little pockets.

Clear out those little piles, they urged, saying even with the best defensible space efforts, there are spots that are easy to overlook. Old nests left by birds in your eaves can pose a problem and other bits of dry debris can be counteracted with fine-mesh screens on your vents.

“We’re getting ember showers (that travel) for miles,” Perry said, and everyone understood it only takes one spark to catch a little buildup of dry fuels around a building and turn into a structure fire.

Perry encouraged anyone interested in fire safety and defensible space to check out the excellent YouTube videos by Jack Cohen, Ph.D., a research physical scientist for the Missoula Fire Sciences Laboratory.

According to the U.S. Forest Service’s Fire, Fuel and Smoke Science Program, Cohen “has been involved in wildland fire research since the early 1970s” and has served at USFS fire laboratories in Missoula, Montana, Riverside, California and Macon, Georgia.

Cohen is also a co-developer of the U.S. National Fire Danger Rating System and has contributed to the development of U.S. fire behavior prediction systems.

PIO Jon Perry told his Quincy audience that Cohen has conducted research on live fuel fire behavior and focused on how wildland-urban fire disasters occur, as well as how homes ignite during extreme wildfires.

Search Youtube.com for Jack Cohen, fire scientistand see videos like this one, “Your Home Can Survive a Wildfire,” at https://youtu.be/vL_syp1ZScM.