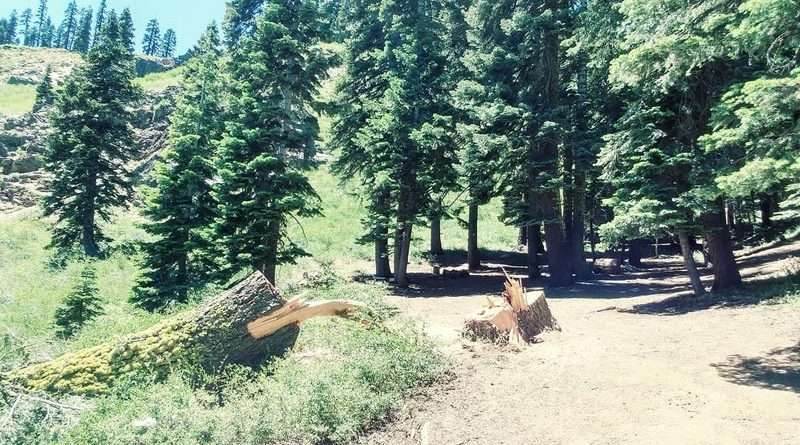 Information regarding the felling of the tree and deer poaching or possible suspects can be forwarded to local enforcement officers at CDFW: Lieutenant Kyle Kroll at 575-5736 or Plumas National Forest Law Enforcement Dispatch at 283-7838.
News
July 21, 2018July 19, 2018 Staff

On or near the July 4th holiday weekend, law enforcement officers with the California Department of Fish and Wildlife, and Plumas National Forest, received information that unknown individuals had unlawfully taken a deer out of season, and cut down an old growth live fir tree within the Mount Hough State Game Refuge in the Plumas National Forest.

The area of the violations was at Crystal Lake, located between the towns of Quincy and Taylorsville. Hunting and possession of firearms is prohibited within California State Game Refuges. State Game Refuges were established in the 1910s in an effort to help enhance deer populations. All wildlife within State Game Refuges is protected.

Deer poaching and hunting within the State Game Refuge, and negligent destruction of trees on public property are misdemeanor violations, carrying maximum penalties of up to six months in jail and $1,000 fines.

Any information regarding the incident or possible suspects can be forwarded to local enforcement officers: CDFW Lieutenant Kyle Kroll at 575-5736 or Plumas National Forest Law Enforcement Dispatch at 283-7838.

CDFW reminds the public that individuals with any information related to unlawful hunting, fishing or pollution are encouraged to call Californians Turn in Poachers and Polluters (CalTIP) — CDFW’s confidential secret witness program — at (888) 334-2258 or send a text to tip411. Both methods allow the public to provide wildlife officers with factual information to assist with investigations. Callers may remain anonymous. Information leading to the arrest and conviction of violators are eligible for a reward of up to $1,000 from CalTIP.