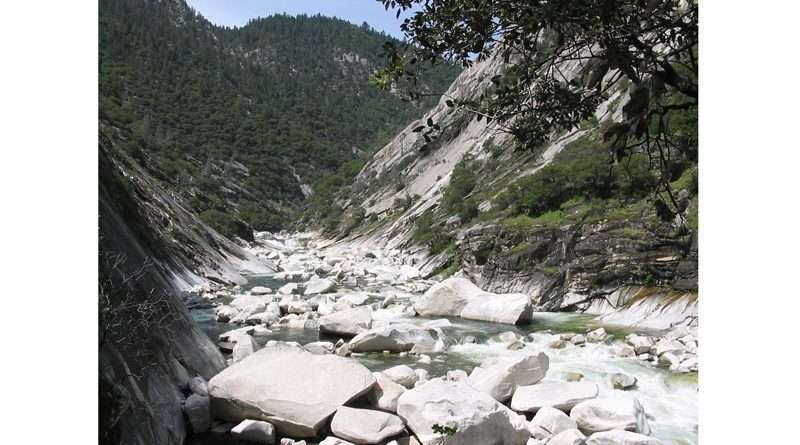 The federal 1968 Wild and Scenic Rivers Act designated eight rivers, including the Middle Fork Feather River, as the first protected wild and scenic waterways in America. Curtain Falls is one of many spectacular pristine sections of the Feather River. Photo by Darrel Jury
News
November 13, 2019November 20, 2019 Roni Java, Staff Writer

One year ago, Friends of Plumas Wilderness (FPW) premiered their visually stunning short film “Visions of the Lost Sierra,” an 11-minute tribute to all that makes the Middle Fork of the Feather River worthy of its designation as one of America’s first nationally recognized waterways under the federal 1968 Wild and Scenic Rivers Act.

Today, after winning praise and applause at 26 film festivals in nine states, the film is launching online to wider audiences on YouTube.com and at plumaswilderness.org/visions . It’s also making a special new appeal.

“We’d like to see more wild and scenic rivers protected,” said FPW President Darrel Jury on a recent evening over wine and conversation with other members of the nonprofit organization that promotes environmental stewardship throughout Plumas County.

FPW hopes “Visions,” which was filmed and directed by acclaimed Chico-area cinematographer Matt Ritenour to provide a look into the past, present and future of the Middle Fork, will help to accomplish this goal. The short film was made possible by generous donations from Patagonia, the Little-Kittinger Foundation, Plumas Common Good, Feather River Bread for the Journey and numerous individual donors.

As part of the online launch today, Jury and other FPW members have created their own YouTube channel and a petition drive to gather signatures that will be presented to local leaders and decision makers, such as the Plumas County Board of Supervisors and the Plumas National Forest Supervisor. The petition will share the conservation message of the film and help demonstrate local voices in support of requesting more wild-and-scenic designations within the watershed.

Tributaries to the Middle Fork and North Fork would be high on the list to advocate for, according to FPW. Building federal support takes time, patience and perseverance and it all begins at the local level.

With the free online availability and new social media outreach for “Visions of the Lost Sierra,” viewers are encouraged to sign FPW’s petition. So far, 250 signatures have been collected.

The National Wild and Scenic Rivers System was created by Congress to preserve certain rivers with outstanding natural, cultural and recreational values in a free-flowing condition for the enjoyment of present and future generations.

Jury said the U.S. Forest Service has documented over 300 miles of rivers in the Lost Sierra as “recommended or eligible” for designation as wild and scenic, including rivers within the Plumas and Tahoe National Forests.

He explained that only 77.6 miles of the pristine Middle Fork Feather River have been designated by the federal government under the 1968 act.

In addition, according to the wilderness group and its volunteers, important as the 1968 designation was for the Middle Fork Feather River, the Wild and Scenic Rivers Act only protects a half-mile wide corridor along the river.

FPW’s awareness campaign states that adjacent wild lands and rivers are threatened by illegal roads, dumping, marijuana grows and dredging — all of which could negatively impact the water source for 65 percent of California.

As a local conservationist, Jury often meets with people who appreciate the need to accommodate recreation and development of natural areas, but they also understand the deep importance of preserving wilderness now and for the future. The new FPW petition drive provides an avenue for acting on those convictions and Plumas County is uniquely suited to such efforts.

With more than 72 percent of the land in Plumas County publicly owned, the Lost Sierra has a population density of about six people per square mile. Compare that with Los Angeles County where the numbers come in at 2,138 people per square mile and the need to preserve wilderness and work for potential designations of wild and scenic rivers makes a lot of sense.

Trinity Stirling, vice president for Friends of Plumas Wilderness, is overseeing social media and publicity for the online access to the film.

“We’ve had five public showings in our own county for about 700 people so far,” she said. “Over 300 people came to the Tobin showing and they loved the kayaking scenes. Now, with ‘Visions’ going online for anyone who loves wild places, I’m excited for even more people to learn about the national significance of the Middle Fork and to understand the California State Water Project.”

Everywhere that “Visions of the Lost Sierra” has appeared, audiences have cheered their support for the preservation of unobstructed, wild and free-flowing rivers.

Jury and his wife, Darla DeRuiter of Feather River College, hope people who see the film are inspired to take action and advocate for protecting wild places in California and elsewhere. Early indications are positive and a new screening is in the works at the Patagonia store in Reno.

The couple has attended showings of the film in places as near as Quincy and Nevada City and as far away as Louisville, Kentucky, and Santa Fe, New Mexico. In Eugene, Oregon, a fellow came up to Jury and said, “Hey, didn’t I see you at the Feather River Film Festival?”

Dick Laursen, who grew up on Milsap Bar in the Middle Fork while his family mined for gold in the 1940s, hiked and swam the entire Middle Fork to the 1960s construction site of the Oroville Dam — twice. He is a dedicated proponent of protecting pristine rivers and wilderness and is a prominent interviewee in “Visions of the Lost Sierra.”

Laursen attended the Wild and Scenic Film Festival screening in Nevada City with his wife, Carol, and 560 other film fans. He told the audience how important it is to be able to go to wild places, to leave them that way and know that they will stay this way for future generations to enjoy.

Jury agreed, saying, “Many people outside our county support protecting our wild and scenic places. Once people see wild places, they understand the value of free-flowing rivers.”

Now folks will have a chance to act on those convictions.

The federal Wild and Scenic Rivers Act only protects a half-mile wide corridor along the Middle Fork of the Feather River. Adjacent wild lands and rivers are threatened by illegal roads, dumping, marijuana grows and dredging — all of which could negatively impact the water source for 65 percent of California.

Protect our clean water and free flowing rivers — #leaveitwild and tell our representatives to expand wilderness designations in the Lost Sierra now.

Sign the Friends of Plumas Wilderness petition online at: