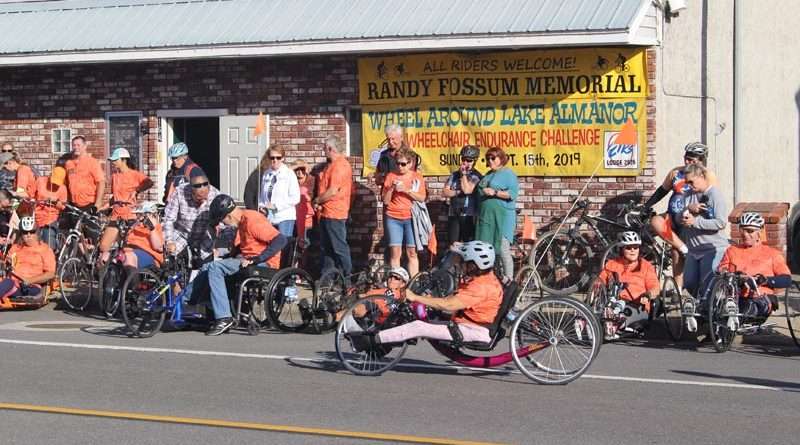 The morning was cool and clear — perfect weather for the 22nd annual Randy Fossum Memorial “Wheel Around Lake Almanor” (WALA) bike ride held Sept. 15 in downtown Chester, sponsored by the Lake Almanor Elks Lodge no. 2626 to raise funds for those in the community that need monetary support to help them through hard times when an unexpected injury or serious illness strikes.

Elks’ member and WALA chairman Terry Parsons, Esquire, said Randy Fossum, a paraplegic handcyclist who has since passed away, is one of the originators of WALA, and would be glad to know the yearly event he created continues to this day.

After breakfast was provided inside the Lodge the morning of the ride, 46 bicyclists including 20 handcyclists, bellies full with egg and sausage, were revved up and ready for the opportunity to undertake a leisurely bike trek where cyclists could enjoy the lakeside scenery during the approximately two-hour tour around the perimeter of the lake, a journey of 34 miles.

One group of bicyclists arrived from Palm Springs and stayed at the Antlers Motel in Chester free of charge, “which was so awesome of them to do that for us,” Parsons said.

He shared that the successful event raised a few thousand dollars from registration fees and donations from individuals in the community, along with more donations still pouring in.

“The handcyclists always rise to the challenge of riding their handcycles around Lake Almanor to raise money,” he said, “because they are deeply committed to helping others, not just themselves.”

Four rest stops were set up en route to quench the riders’ thirst and to provide some snacks, manned by volunteer groups that included Chester Community United Methodist Church, Rotary Club of Chester, the Almanor Recreation and Park District and the Almanor West Shore Coalition.

Westwood Sanitation also donated a handicap-accessible restroom for the day, made available at the West Shore rest stop.

“Special thanks goes to our volunteers who were stationed at the various rest stops, as well as to those who drove their cars along the route as a safety measure for the riders,” he said.

Parsons said one of the objectives of the event is to bring heightened awareness to the wider community about those with disabilities, adding that the Elks are always very grateful for all the volunteer support as well as the donations that make the WALA program such an achievement.

Contributions go directly to help those who need financial assistance with medical bills in the Almanor Basin due to acute illness.

“I’m also grateful for the folks at the Elks Lodge who step up to make this event happen every year. We have a great group of people.”

To donate to the Lake Almanor Elks toward the many programs and community projects they sponsor throughout the year, send your tax-deductible donations to Lake Almanor Elks Lodge, P.O. Box 1329, Chester, 96020.