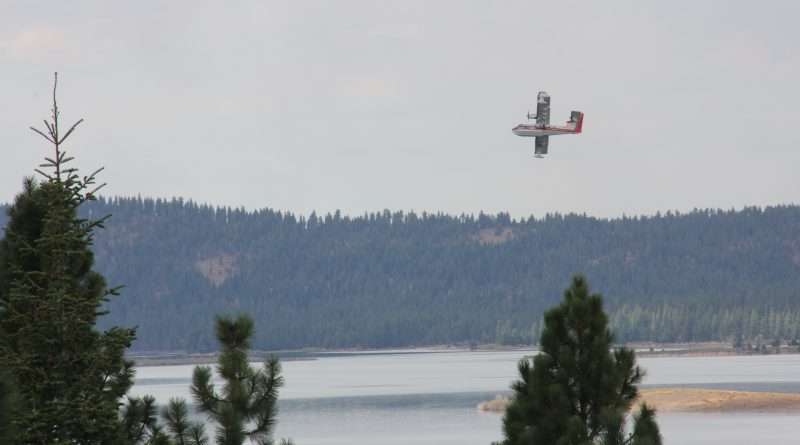 The aerial assault continues on the Walker Fire. Photo by Trent Saxton

In an effort to keep the fire within its current footprint if tested by the forecasted winds, firefighters are working diligently to strengthen containment lines by removing fuel between the fire and control lines. This will serve as a buffer and limit the potential of the fire extending beyond established lines.
Building on the successful firing operations from yesterday and last night, firefighters continued firing in places, or mopping up around the fire’s perimeter. Firing operations began on the 25N10 Road at Clover Dip on the southern flank and may continue into tonight as wind conditions permit. Fire crews expanded the buffer along the 176 Road to the 03 Road below Antelope Lake on the northern flank, reducing the risk of spot fires across the line from active fire in the large unburned interior.

Tonight, firefighters will monitor, strengthen and improve containment lines. Firing operations will continue to clean up any unburned fuel along control lines, followed by mopping up hot embers and making sure they are out.

The warming and drying trend will continue throughout the weekend, along with increased winds. Sunday is forecasted to bring winds up to 40 mph. These conditions will create much more active fire behavior and more challenging conditions for firefighters on the line.
Evacuations: Contact your local Sheriff’s Office for the most current information.Mandatory: Murdock Crossing and Stony Ridge areas
Advisory: Antelope Lake, Frank’s Valley, Flournoy Bridge, and Milford areas

The warming and drying trend will continue throughout the weekend, with warmer temperatures, lower humidity and increased winds. Sunday is forecasted to bring winds up to 40 mph. These conditions will create much more active fire behavior and more challenging conditions for firefighters on the line.