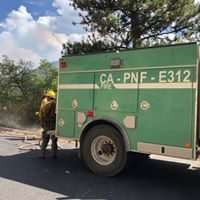 1:30 p.m., Sept. 14: Fire crews are doing everything they can to prepare for the 40 mph winds that are expected tomorrow on the Walker Fire. According to a spokesperson, residents should be prepared to see more smoke in the Milford area as the winds will be blowing from the southwest as they did when the fire made a run last week. Once crews make it through Sunday, rain is forecast for Monday, which could have a significant effect on fighting this fire. Additionally, more rain is expected Wednesday.

Following is from this morning’s briefing: Last night firefighters continued mopping up and securing the remaining containment lines around the fire’s perimeter. Structure protection remains a priority with crews using hose lays, water sprinklers, structure wrapping, and burn out operations around structures still threatened by fire within the interior pocket.

Today, crews will strengthen firelines, burning out small pockets of adjacent vegetation, and continue mop up, extinguishing hot embers along the containment lines. A suppression repair group will begin assessing needs and move in equipment in the northeastern corner near Antelope Lake. Initial attack crews will be available to respond to any new fire starts in the area.

A RED FLAG WARNING begins today in anticipation of high winds predicted to be 40 mph beginning tomorrow. Temperatures will be warmer today and tomorrow with highs in 80’s and humidities will be in the teens.

7:15 a.m., Sept. 14: The Walker Fire, which started about noon on Sept. 4 approximately 11 miles east of Taylorsville in Genesee Valley is now at 51, 872 acres and is 42 percent contained. There are now 1,918 personnel on the fire. Firefighters are preparing for the increased winds expected for Sunday.