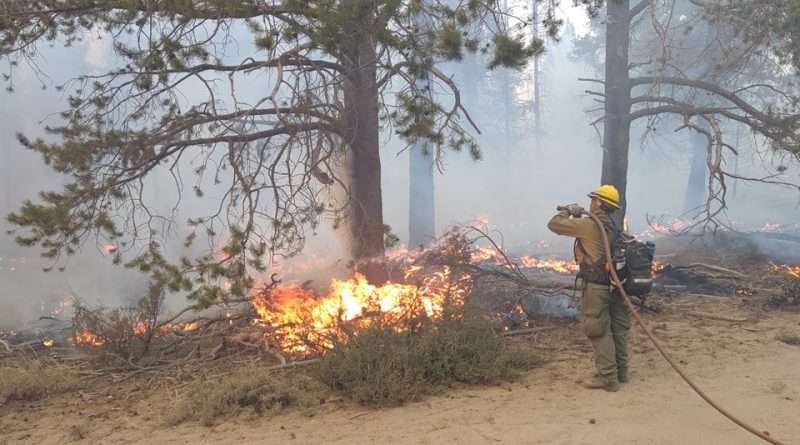 7:30 p.m., Sept. 15: All of the preparation leading up today’s wind event paid off. The winds hit as predicted, but the fire perimeter held, with just one spot fire reported and quickly surrounded. Though smoke was visible from the fire today, it was from burning within the fire’s footprint and all structures were protected. The Plumas National Forest reported a new start about 3 miles north of the Walker Fire, but it is considered a separate incident. That fire, dubbed the Stony Fire, was also quickly met by firefighters from the Plumas National Forest, as well as air attack from the Walker.

7:50 a.m., Sept. 15: Today is a critical day for the Walker Fire. At this morning’s briefing, all those who spoke cautioned the fire crews to be vigilant due to the high winds predicted. Crews have known this red flag warning was coming and have spent the past few days reinforcing fire lines and preparing.

The good news is that the fire that broke out Sept. 4, 11 miles east of Taylorsville, is now 62 percent contained. It is 53,186 acres and has 2,058 personnel assigned to it. More good news is that rain is forecast tomorrow and later this week, and, if it comes in as predicted, it could curtail fire season.

From this morning’s briefing:

Today is a RED FLAG WARNING with 40 mph winds predicted and humidities in the teens. This wind event is expected to extend overnight. This is a critical fire environment with embers possibly traveling up to a ½ mile. Spotting occurred over the line along the south edge of the fire last night. Firefighters are working diligently to fully contain these spot fires and have made good progress in doing so. Around the remainder of the fire perimeter, crews continued to mop up, extinguishing hot embers, up to 200 feet on the inside of the containment line.

Today and tonight, firefighters, air resources and equipment will be in all areas of the fire area remaining vigilant and continuing to strengthen and secure the fire perimeter. Priorities will be to hold all containment lines and catch any spotting embers. Where possible, firefighters will implement waterbars and incorporate other erosion-control measures on the fireline in preparation for the rain coming on Monday. Initial attack fire personnel and equipment remain available to assist the Plumas National Forest in the event of any new fire starts in the area.