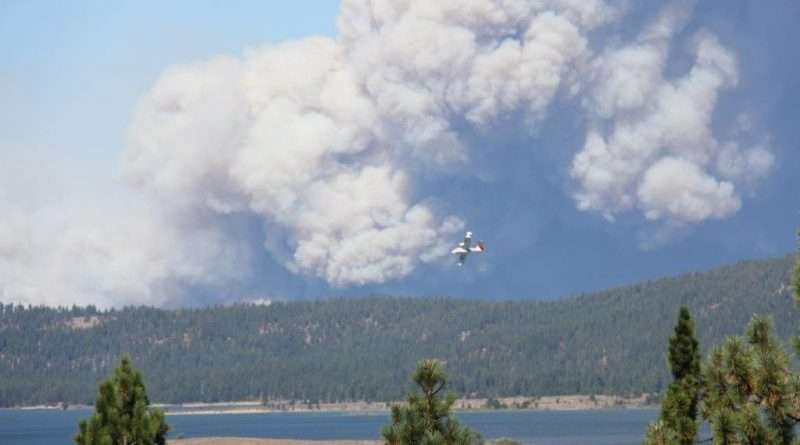 9:10 p.m. update, Sept. 7:  According to the Forest Service’s latest briefing, the fire is now 5 percent contained and approximately 24,040 acres.

No new evacuations have been ordered and no structures have been lost. The fire’s progression slowed earlier in the day as a result of cloud cover and reduced fuel to the north as it entered the previously burned Antelope Fire area. The fire spread to the north up Wheeler’s Peak drainage and east around the Antelope Fire scar reaching a mile and a half of south of Murdock Crossing.

When smoke and wind conditions permitted, VLAT’s (Very Large Air Tankers) capable of dropping up to 10,000 gallons of retardant, slowed the fire’s spread to the northeast and on the western flank in the Wheeler Peak drainage. Aircraft support gave crews working in conjunction with dozers time to construct fireline along the southern edge of the fire. Two Super Scooper aircraft dropped water and controlled two spot fires out in front of the main fire to the east. Resources continued patrolling and secured the fireline along the southwest edge of the fire, removing the threat to structures. Tonight, crews will continue securing the 25N42 road while other night shift resources look for opportunities to construct containment line along the fire’s edge where possible as well as areas further out from the fire with the highest probability of successfully containing the fire.

9 am, Sept. 7: The Walker Fire is at 24,040 acres. Sheriff Greg Hagwood announced the evacuation of the Antelope Lake area.

6:45 a.m., Sept. 7 update: Yesterday The Walker Fire was reported at 2,900 acres, but that number has since been adjusted dramatically to approximately 17,912 acres according to data released by the Forest Service last night. It is 0 percent contained. A morning update is expected shortly.

Fire activity increased substantially due to forecasted winds over the fire area. The fire progressed to the northeast, crossing Last Chance Creek through Elephants Playground in the direction of Babcock Peak. Crews were able to hold the fire east of the 25N42 road. Suppression action was taken on spot fires that ignited near and just north of the 172 road, east of Flournoy Bridge. Crews continued structure preparation and were successful in structure defense, containing the spot fires that ignited around them. No structures have been lost.

7 p.m. update, Sept. 6: During its nightly update the Forest Service is reporting that dry air and erratic winds have kept the fire behavior up all afternoon, as has witnessed by residents across the county. Prediction is for winds to calm tonight. The fire is now at 2,900 acres, though that figure could change if air recon can fly tonight. No new evacuations have been ordered. Though the smoke appears menacing from various vantage points the Forest Service reiterates that the areas around Graeagle/Blairsden, the Lake Alamanor Basin, Greenhorn Ranch, Quincy, Crescent Mills, Greenville, Susanville, Janesville, Milford and Portola are NOT under any threat from the fire.

2 p.m. update, Sept. 6: The Forest Service confirms that fire behavior is definitely picking up, as was expected, with increasing and unpredictable winds. Only areas that have already been notified are evacuated. Per the Plumas County Sherriff’s Office, that is for “the Genesee Valley Road Corridor as well in the Ward Creek area, and the Flournoy Bridge area.” No additional evacuations have been ordered since last night. To sign up for Code Red notifications, visit the Plumas County Sherriff’s office webpage at https://www.plumascounty.us/587/Sheriff-Coroner.

Noon update, Sept. 6: The angry looking plumes of smoke visible from throughout Plumas and neighboring counties from the Walker Fire are alarming, but the Forest Service announced that the areas around Graeagle/Blairsden, the Lake Alamanor Basin, Greenhorn Ranch, Quincy, Crescent Mills, Greenville, Susanville, Janesville, Milford and Portola are NOT under any threat from the fire. Crews are hard at work out on the Walker Fire, with firefighters and engines rolling in from many areas to help! Winds are expected to pick up this afternoon. The Forest Service asks residents to call 530-616-8625 with questions about specific areas.

8:30 a.m., Sept. 6: The Walker Fire, which broke out on the early afternoon of Sept. 4 is at 2,000 acres and 0 percent contained as of this morning. Yesterday morning the fire stood at 850 acres and 5 percent containment. The fire is burning approximately 11 miles east of the town of Taylorsville in Plumas County.

Mandatory evacuations were called for last night when winds pushed the fire to the east/southeast. The Plumas County Sheriff’s Office issued the evacuation order and personnel went door to door alerting residents in the Genesee Valley area impacted. It’s estimated that 50 to 75 individuals were affected. The Genesee Valley Road is now closed at the Flournoy Bridge.

To date no structures have been lost and crews will continue to prioritize structure protection. Assistant Editor Victoria Metcalf spent yesterday afternoon at the fire and interviewed many of the local districts involved in protecting residences. Her photos and story will be in the next edition of the newspaper.

Erratic winds are expected this afternoon, which could increase fire behavior. This site will be updated as more information becomes available.

8:55 p.m. UPDATE: Firefighters will continue to arrive throughout the night. A Forest Service spokesperson is advising that Plumas County residents can expect to wake up to the smell of smoke as the nighttime inversion will settle the smoke in the valleys. The next update is set for  7 a.m. tomorrow morning with acres burned and containment numbers posted when available.

One thought on “Walker Fire-Day 4”