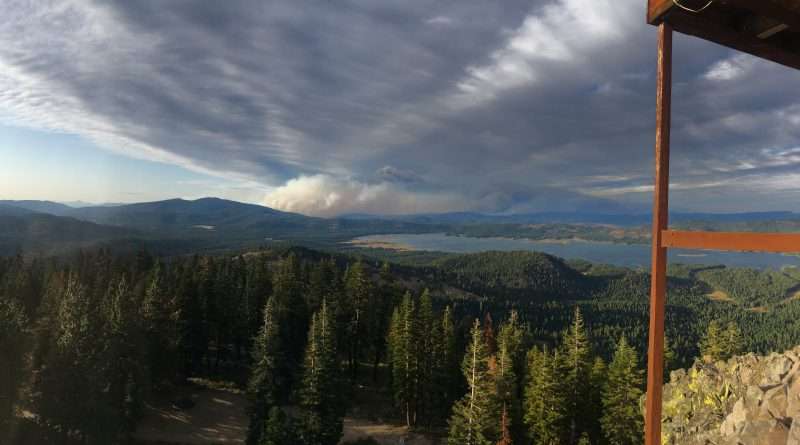 7:30 a.m., Sept 10: The Walker Fire is now 47,340 acres and 12 percent contained. Personnel from different states and agencies make up the 1,096 assigned to the fire, double the number on the fire last week.

According to the latest briefing from Incident Command: Firefighters engaged the fire overnight in cooler weather conditions. The fire pushed against containment line in the northeast and crews quickly took suppression action to contain several small spot fires. Northeastern containment line will be improved by extinguishing hot spots utilizing the hoselays in place. Any heat along the fireline and into the interior the fire will be removed, which is referred to as mopping up. The fire pushed on the southeast edge of the perimeter as well. Crews constructed containment line to control several spot fires in this area and will reinforcing and strengthening the line for predicted northwest winds. Crews patrolled firelines across the north which held after tactical firing was used to burnout the fuel adjacent to the fireline, reinforcing and creating a buffer to strengthen and secure existing containment lines. Crews patrolled the southwest and southern edge of the fire, holding existing fireline. Containment lines were constructed moving north on the west side towards Wheeler Peak. Crews will extend that containment line further along the west side working from the north and south.

As conditions permit, crews will implement tactical firing operations supported by ground and air resources. This can produce more visible smoke. Crews will hold and mop up along the Forest Road 25N42, Flournoy Road and patrol the southwestern edge near structures surrounded by fireline and hoselays.

A chance of showers and thunderstorms is forecasted today. Thunderstorms can produce gusty, erratic winds and visible smoke may change directions as winds may change as the system moves through the fire area.

2:45 p.m., Sept. 9: The Lassen County Sheriff’s Office is reducing the mandatory evacuation order for residents residing along Hwy 395 from the Thunder Mountain Road (Wales Canyon) to the Laufman Grade (Old Hwy 59), including the communities of Milford and Brockman Canyon, to an evacuation warning. Milford residents only will be allowed to return to the area. Security patrols will continue into the evening hours. The evacuation warning means residents should be prepared to evacuate the area. The Plumas evacuation orders will remain in place for the next 24 hours according to Sheriff Greg Hagwood.

7:30 a.m., Sept. 9: The Walker Fire, which broke out about noon on Wednesday, Sept. 4, in the Genesee Valley, 11 miles from Taylorsville, has grown to 43,931 acres and expanded into Lassen County forcing evacuations there. It is just 7 percent contained. There are now 825 personnel assigned to the fire with a base camp in Taylorsville, and a secondary site being established in Lassen. The cause of the fire is still under investigation, unlike other fires that broke out last week and were attributed to lightning.

Critical fire weather is continuing in the area today with erratic winds. There is a chance for showers and thunderstorms which will bring cooler temperatures and higher humidity levels on Tuesday. Dry and warmer conditions will return later in the week.