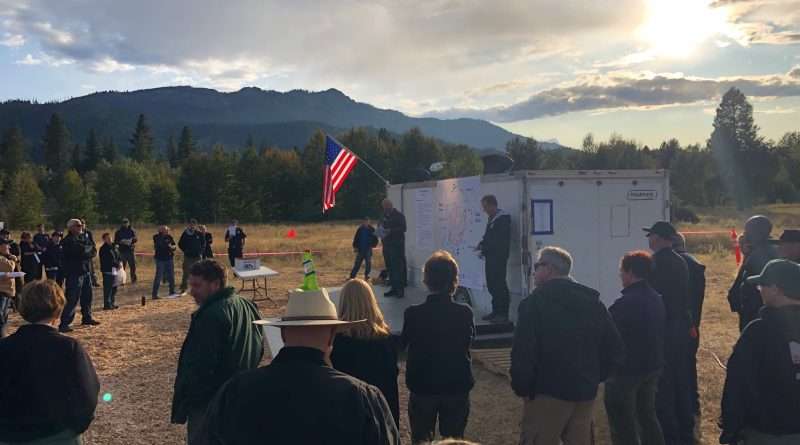 Fire personnel gather for the daily briefing. They receive assignments as they prepare for the second week of battling the Walker Fire in Plumas County. Photo submitted
News
September 12, 2019September 14, 2019 Editor

Fire crews continued to reinforce containment lines and hose lays throughout the day, in preparation for stronger winds predicted Sunday. On the northeastern section of the fire near Round Mountain, crews burned  underbrush adjacent to containment lines. Crews also worked on spot fires that ignited during the night on the south end of the fire and continued to protect structures.

More containment work will be completed tonight focusing on the northern edge of the fire near Antelope Lake and the southeast where a 2-acre spot fire ignited today.

The weather is forecast to be warmer and drier for the next two days, with the addition of strong southwest winds and low humidity on Sunday.

According to this morning’s briefing: The fire’s torching and spotting in the southeastern end of the fire kept crews busy throughout the night. Firefighters continued to improve containment lines and added hose lays, making good progress in the Wheeler Ridge area, connecting established lines with unfinished portions. Structure defense is in place in threatened areas including Murdock Crossing, and crews were able to mop up additional areas in the Antelope Lake and eastern side of the fire.

Fire behavior analysts are predicting increased fire activity today as fuels dry out after Monday’s rain event. On the northeast section of the fire, near Round Mountain, firefighters will continue to mop up using hose lays to create more fire line depth into the burned area. Dozers and firing tactics will be used where possible to improve containment lines on the eastern and southern fire boundary. Throughout the day, firefighters will work to strengthen and improve containment lines around the fire. Aerial resources will continue to support fire operations as visibility improves.

The new fire camp located at Four Corners is allowing firefighters quicker access into the eastern portions of the fire, but has also increased vehicle and equipment traffic in eastern Plumas County. The Forest Service asks the public to be aware of this increased activity and to please drive accordingly.

Due to changing wind patterns, smoke was pushed into portions of central and eastern Plumas County yesterday. Today, winds are expected to be light from the southeast in the morning and changing to the southwest in the afternoon, conditions that will create another smoky day in the area.