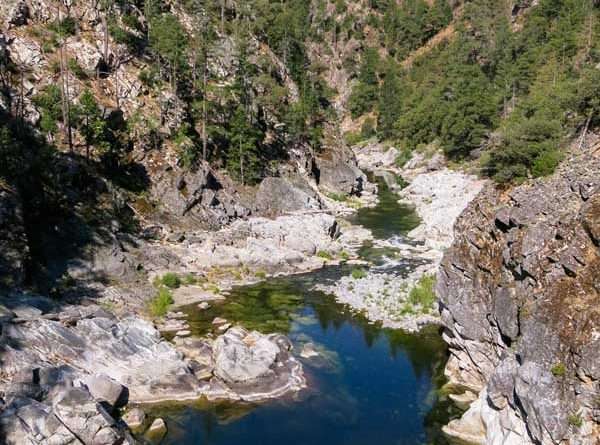 Pristine and hard to access, the Middle Fork section from south of Beckwourth to Lake Oroville includes wild places and stunning views like this one, taken from the Pacific Crest Trail Bridge at Butte Bar. Photo by Darrel Jury
News Opinion Where I Stand
August 16, 2022 Editor

Glittering rivers of vibrant trout, sprawling meadows tucked in quiet forest pockets, mountain skylines serrated with conifers rolling as far as the eye can see – when you consider the magnificence of Plumas County and the Upper Feather River Watershed, what imagery comes to mind? Is it the pristine habitat of rivers and lakes, forests and canyons? The creatures that thrive here? Is it the faces of people of this amazing community – one rooted so deeply in the nation’s history – that marks this place?

As of today, only 4 percent of the Plumas National Forest has permanent protections. What are we doing to protect it?

Clean water is an essential part of who we are. As the headwaters of the State Water Project,  the Feather River supplies water to more than 27 million California residents and 850,000 acres of agricultural land feeding the nation (over a third of the country’s vegetables and two-thirds of the country’s fruits and nuts are grown in California). The water infrastructure beginning at the Feather River Watershed cascades well beyond its beginnings here.

Designated as the original California Wild & Scenic River, the rugged Middle Fork Feather is one of eight rivers protected under the government act passed in 1968. Today, the Forest Service has identified an additional 200 miles along 21 more rivers and creeks eligible for Wild & Scenic designation on the Plumas National Forest. This designation – a mission of the Friends of Plumas Wilderness – ensures our free-flowing rivers will remain that way: no dams or diversions into the future.

Plumas County is a tapestry woven with diverse perspectives from a colorful past: it is the site of the first ski races in the Americas and now the Longboard Revival Series, home to relic Gold Rush towns, and the Beckwourth Trail and California Trail weave through the watershed.

Waters and lands are home to the many tribes and bands of Maidu Indians, with villages and burial grounds; hunting, fishing, and gathering areas; and trails that have been used for centuries and generations. These sacred grounds continue to be culturally critical.

The California Floristic Province is a biodiversity hotspot – the only one in the U.S. The Upper Feather River Watershed is at the eastern edge of the Province. Our conifer forests, mammal, bird, and insect diversity, and the potential for protection makes this place special.

The only gray wolves in California make their home here, and we are a hotspot for rare or endangered frogs which shows the importance of our waters: foothill yellow-legged, Sierra Nevada yellow-legged, and California red-legged. Did you know the Upper Feather River Watershed is a stronghold for the western bumble bee?

And our location at the triple-junction of the Cascades, Sierra Nevada, and Great Basin only enhances that biodiversity! It is here that these iconic Western landscapes converge and their species mingle – sagebrush and red fir, pronghorn and pine marten just miles away from each other.

There is a long history of scientific study on the Plumas National Forest, from the UC Berkeley Forestry Camp’s founding in 1915 to experimental forests and Research Natural Areas like Mud Lake and Mt. Pleasant. Almost 4,000 students have attended the 8-week UC Berkeley Forestry Camp near Meadow Valley over the past century. In recent years, the class has averaged around 30 students, although in 2020 only two were able to attend!

Fuels reduction – the removal or reduction of overgrown vegetation through thinning and prescribed fire – are essential tools to maintain and restore the healthy conifer forests of the Northern Sierra Nevada. A recent LA Times article featuring Plumas National Forest fuels officer Ryan Bauer discusses the importance of protecting large, fire-resilient trees, which capture the most carbon: 30 percent of biomass carbon is stored in the largest 1 percent of trees in North American forests.

Following a study of 154 large California wildfires between 1985 and 2019, The Times article noted that those that burned on private industrial forest land were 1.8 times more likely to be high severity fires than those on public lands. Since over 80 percent of wildfires are started by humans, ensuring some public lands remain as they are now instead of getting fragmented by new roads seems like simple logic. We already have so many roads – over 4,000 miles on the Plumas National Forest.

Why does this matter?

Maintaining the current state of forests, rivers, and canyons of the Upper Feather River Watershed, while acknowledging the need to improve forest health, address wildfire risk, and restore areas post-fire: now is the time to protect this place.

Only 4 percent of the Plumas National Forest has permanent protections (Bucks Lake Wilderness, Middle Fork Wild & Scenic River), and 80% of survey respondents supported future land protections. Explore the Friends of Plumas Wilderness website to learn more about what can be done, and join our field trip series in August, September, and October.

Letter to the Editor: About a National Monument