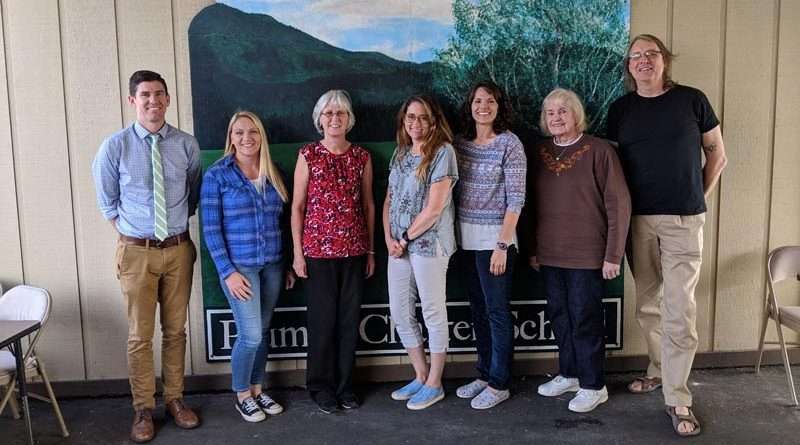 From anti-charter legislation to progress on their new facility to student assessment data, Plumas Charter School board of directors and staff members covered a wide range of topics during their regular board meeting Sept. 9.

PCS currently has 324 students enrolled across its four learning centers, down three from the same time last year. Though there are fewer students at the Quincy Learning Center this year, the Greenville and Chester learning centers have each seen an increase in enrollment.

Of those students, 255 are returning to the school.

Washburn informed the board that three or four representatives from the Western Association of Schools and Colleges will be visiting PCS for four days at the end of March.

PCS has been accredited by WASC since 2013; this visit is part of a full six-year accreditation. The WASC team will visit every site and interview students, parents, teachers and board members.

“This visit is really intense and will be taken very, very seriously,” said Washburn.

With written summary information provided by legal counsel and charter advocate groups, Washburn next shared an update on new legislation that will further regulate charter schools, and how it might affect PCS.

Assembly Bills 1505 and 1507 have passed through both the House and Senate, and are now awaiting the governor’s signature.

According to the Charter Schools Development Center, of which PCS is a member, Assembly Bill 1505 makes it easier for new charter petitions to be denied, and harder to appeal such denials to the state. It also imposes a moratorium on the formation of new nonclassroom-based charter schools (PCS is nonclassroom-based).

Although the bill changes the appeal process for most charter schools, PCS’s process remains the same because Plumas is one of the few single-district counties in the state.

Finally, AB 1505 revises the charter renewal criteria and process, making student academic achievement the most important consideration when applying for a charter renewal.

Though PCS student test scores have never been low enough to trigger technical assistance from the school district, the school is actively pursuing ways to better measure and support academic success.

“As a leadership team and staff, we’re well aware of the need to continue to improve student academic achievement,” said Washburn.

AB 1507 restricts charter schools to one resource center, which must be within the boundaries of the school’s authorizing district. Initially, PCS administrators were concerned about what this would mean for PCS, which currently operates six learning centers and a business office in a total of seven locations across Plumas County.

However, revisions to the law created several exceptions, allowing schools to operate additional centers if the authorizing district approves them and they are within district boundaries.

Washburn said she was discussing this issue with Plumas Unified School District. Later, she confirmed that the district had agreed that, because all of the existing centers were approved through PCS’s last charter renewal, this portion of the bill will not directly affect PCS.

The PCS board and administration had previously investigated the possibility of switching to a classroom-based mode of delivery, and that option is still on the table should the need arise, said Washburn.

Washburn announced to the board that PCS’s business office had undergone a successful and “very cohesive” move. Previously, she, along with the school’s office manager and registrar, shared space with the Quincy Learning Center’s high school location at 80 Main St. Now they can be found at 20 Crescent St.

Next, the board members were presented the current lease documents for PCS’s existing locations, and then Washburn offered an update on the latest progress toward constructing a new school facility in Quincy.

After engineering survey results revealed that building on the Quincy Junction Road property was no longer feasible, PCS began investigating 1425 E. Main St. This property is currently owned by the Central Plumas Recreation and Park District, and it abuts Pioneer Park and the Plumas-Sierra County Fairgrounds.

Washburn reported that she had attended the recent CPRPD board meeting; she said that even though purchase, lease and use details have yet to be finalized, “everybody is still on board and ready to keep having discussions.”

A special use permit application has been submitted to the Plumas County Planning and Building Department, and a public hearing regarding the property will likely be held in November. After that, said Washburn, active negotiations can commence in earnest between the CPRPD and PCS facilities committees.

The group discussed how small sample sizes and student transience can cause some PCS statistics to be misleading, but Schramel pointed out that these findings “triggered some curriculum reviews.”

“Why are we not achieving the growth we want to see?” he asked. He reported that PCS staff will be taking a hard look at adopted curricula, staff fidelity to the curriculum, and implementation.

Goals for the 2019-2020 year are as follows: Achieve at least a 2 percent increase in the percentage of students meeting or exceeding the standards, or moving up one performance band, for both English language arts and mathematics.

Although the format for PCS graduation from 12th grade will remain the same, the school is changing the way students mark their completion of sixth and eighth grades.

Some learning centers had previously organized various types of sixth-grade graduation events; this year, every PCS sixth-grade class will have an official graduation ceremony to mark students’ completion of elementary school.

For the past three years, Indian Valley Academy students, under Schramel’s leadership, have participated in an annual eighth-grade backpacking trip. This year, all PCS eighth-graders will be included on the trek, which Washburn compared to a “rite of passage.” The experience will culminate in a family barbecue and pool day to mark students’ transition out of junior high.

The board also approved job descriptions for a public relations specialist and technology specialist for the school, and received an update on a new remote management system being implemented for PCS’s computer network.

They also discussed Washburn’s professional review and performance measurement strategies. As the school has grown, tasks have been delegated to the leadership of specific learning centers; thus, clarification/codification of the executive director’s role and duties is needed.

The board agreed to form an ad hoc committee to conduct a goal-setting session with Washburn that will also clarify how her role has significantly evolved in recent years.

Finally, the group heard the financial report from Fleming and Holmes.

The PCS board of directors serves to govern the operations of the school, which operates under the California nonprofit Plumas Alternative Learning Services. Learning centers are located in Quincy, Indian Valley, and Chester.

The board meets every month, usually on the fourth Monday; meetings rotate between the Quincy Learning Center, Indian Valley Academy in Taylorsville, and the Greenville Learning Center.

The next meeting is set for Oct. 28 at 3:15 p.m. at 80 Main St. in Quincy. Meetings are always open to the public, and public comment and participation is encouraged. To learn more, call 283-3851 or visit plumascharterschool.org.