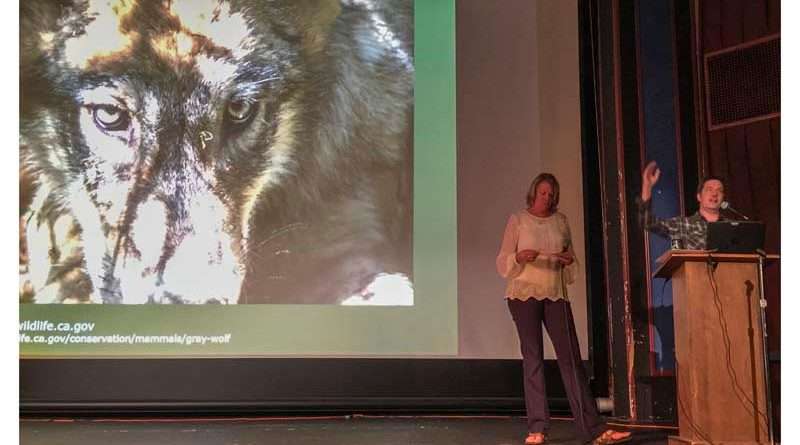 A capacity crowd came out to celebrate Plumas Earth Days week on April 25 and hear fascinating presentations about the complex issues surrounding the ability of humans and agriculture to coexist with wolves in the natural environment.

A free screening of Collin Monda’s 54-minute documentary “The Trouble with Wolves” launched the discussion that followed the 2019 Plumas County Community Sustainability Awards ceremony at the Town Hall Theatre in downtown Quincy. Local companies Quintopia of Quincy and The Brewing Lair of Blairsden sponsored the event.

Guest speaker Kent Laudon, a California Department of Fish and Wildlife Wolf Specialist, also presented information on the Lassen Pack and took questions from the audience.

“Since we’ve got the Lassen Pack right here in Plumas County, we thought this was perfect for Earth Days week,” she said, mentioning that wolves are proposed to be delisted from the endangered species list following their reintroduction into Yellowstone National Park over 20 years ago.

Scanning the audience of attendees representing all sides of the wolves issue, the moderator asked the crowd to approach the evening’s discussion with an open mind.

“We need a reasonable dialogue,” DeRuiter said. “Tonight is about multiple perspectives and, we hope, new insights.”

Warming to the serious topic at hand, she smiled and added, “We all share this one earth. After all, it’s our only source of chocolate!”

Laughter rippled through the theatre and the lights went down for the film.

The film began by letting its interviewees define wolves from their own perspectives — as killers, wild dogs, contributing members of a healthy, functional ecosystem and symbols of the wilderness.

The film featured ranchers talking about investing a lifetime of savings and income in their businesses and being threatened by wolves as predators. Though financial compensation for lost livestock is part of the solution, the ranchers said there is difficulty in proving an animal died as the result of a wolf attack. Cattle also lose weight from their own efforts to evade the predators, which is an economic impact upon businesses.

Livestock are estimated at less than 1 percent of wolf-kills in Yellowstone, according to the top biologist for the park Douglas Smith.

Why do wolves have so many rights, asked ranchers who have received hostile treatment on social media and sometimes death threats from the public when they legally shot a wolf.

Other ranchers demonstrated creative herd management and ranching practices they have adopted in order to live in greater harmony with wolves.

Biologists, scientists and wildlife management experts provided data about the importance of maintaining a balanced ecosystem that benefits all flora, fauna and wildlife in Yellowstone. One interviewee said when nature is imbalanced, “it throws everything out of whack.”

For example, with the elimination of all wolves at the turn of the last century, the wildlife experts showed the impacts upon other species, terrain and more. They explained that elk populations rose to an extent where record harvests of elk were taken (over 26,000 in one recent year) and herds went into winter weak and ill, many unable to withstand the season.

When wolves were reintroduced in the 1990s by bringing animals from Canada to Yellowstone, the original plan was for 30 breeding pairs to reach a population of 300 wolves. With a current population of 1,700 wolves in the national park, the wildlife management specialists talked about federal discussions to delist the animals as an endangered species and ongoing reduction efforts that “basically keep the population stable.”

Other parties to the dialogue included outfitters and tourism advocates who said wolves have value in a healthy natural system where they help control the population of other wildlife. They also estimated that visitors who come to observe the wolves have resulted in over $30 million in economic activity to the region. Families and other wildlife supporters talked about what it meant to them to be able to see wolves and animals in a natural habitat.

FRC’s DeRuiter introduced CDFW’s Wolf Specialist Laudon to talk about the Lassen Pack, his career as a field biologist for 28 years and his work with wolves specifically for the last 22 years in Idaho, Montana, Arizona and New Mexico.

He currently focuses on conserving and managing wolves as they re-colonize Northern California, working on the ground conducting surveys, trapping and collaring wolves.

“If you calculate it,” Laudon told the crowd with a chuckle, “I’ve been working with them for about 180 years in wolf years.”

The biologist talked about CDFW’s California Wolf Plan that was released in December 2016 and the department’s work collecting data on wolves and their travels. Laudon explained that a lot of data is needed to study wolves in the wild. For example, the wolf known as OR54 made the news locally when she logged well over 5,000 miles in her travels between Oregon and Plumas County.

Acknowledging the value of wolves to the ecosystem and wilderness as well as the concerns of rural residents and businesspeople, Laudon showed a series of charts and statistics one of which indicated a rancher whom he was aware of that had lost over 20 animals confirmed as wolf predation.

“It’s very important to help ranchers stay on the landscape. That’s a rancher who is paying for wolf recovery out of his own pocket,” Laudon commented.

The biologist talked about wildlife management practices and four areas in particular for wolves: control, compensation, collaboration and prevention. He also provided information about humane treatment of wolves during capture to place radio collars on the animals for tracking and research purposes.

And when questions arose about safety in the wilderness, he shared common-sense advice about being aware of one’s surroundings, taking sensible precautions for your own safety, and keeping a leash handy if you take your dog into the countryside because some documented wolf encounters involve confrontations with canines who are loose.

“Never say never,” he said. “Generally, wolves are shy of people, but dogs are another issue.”

Finishing his presentation with a series of hilarious real bumper stickers and signs he has photographed over his career across the west, Laudon had the audience in stitches with phrases such as “I wish wolves ate Californians.”

He concluded with these thoughts. “My hope is for a model that includes all of us working together. If we take the time to listen to each other, what’s good for people is good for wolves.”