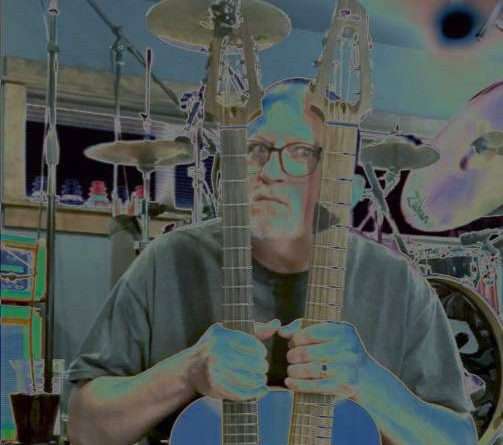 Tommy Miles has been playing and writing music since he was a little kid, which, at least mentally, he still is.  His main musical project for the last 13 years has been The Back 40, an alternative country and rock band in which he plays guitar and drums. In the last 25 years, he was a member of local folk-rock band Jeez Louise, which later became Tarnation, and played guitar, bouzouki and accordion in an electric Celtic project called the Thorndogs and its later acoustic 3-piece incarnation, The UnGnomes. He also played keyboards and saxophones with the DeVilles for several years, as well as drums with Mudbone and the Michael Barclay Blues Band, and various instruments in odd rock projects like Rocket Surgery, Shinöla, and Triple Entendre.  He has organized and performed in several benefit shows for Plumas Arts including tributes to Neil Young, Bob Dylan, and Crosby Stills & Nash, and the Soul Jukebox.

When he’s been able to temporarily put the instruments down, Tommy’s been involved in education for 35 years as a teacher, principal, consultant, and supplemental services provider. He owns and operates Cornerstone Learning, where he teaches K-12 and adult academics, music of all kinds, and aviation ground school.  On the side, he’s the station manager at KQNY 91.9 FM, where he hosts two music shows and a talk show, and on the other side, he’s a Certified Massage Therapist. In his spare time, of which he has none, he runs Synergy Defense Arts, a martial arts school in Quincy. He publishes his writings, music, videos, and other content on a quaintly anachronistic email service.

Words & Music is a program of Plumas Arts, featuring acoustic performances of music and the spoken word. Doors open at 6:45 p.m., with the Featured Artist starting at 7 p.m.; the entire show goes until 9 p.m.. Admission is $3 per person and is cash only. Sign up at the door before 7 p.m. for an Open Mic spot following the Featured Artist.  Please arrive early to sign up for open mic performances. After this special St. Patrick’s Day return, Words and Music will continue to be on the second Thursday of the month, like it historically has been from October to May each year.  For more information about this or any of the many programs sponsored by Plumas Arts, please call (530) 283-3402, or visit our website at www.plumasarts.org.

Words and Music has been a program of Plumas Arts since 1989. Please enjoy our recorded virtual words and music program anytime that ran over the last two years through our YouTube Channel and we hope to see your smile at Words and Music at Patti’s Thunder Café this month or soon!  https://www.plumasarts.org/words–music.html .