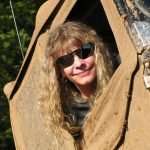 Yvonda “Vonda” Sioux Brehmer Wilkes, age 52, of Quintette, California, passed away on August 11, 2020 due to complications from her short battle against breast cancer. Born on June 23, 1968 in Berkeley, California to Cleon (James) and William Brehmer, she spent her earlier years in El Sobrante, California and in 1979 the family moved to Chester, California. She is remembered by her younger brother Aaron, who lovingly called her “Donni,” as being fiercely loyal and protective of him, which she continued to do throughout the years. Vonda shared her mother’s passion for animals and as a kid, helped raise several Great Danes and also traveled to many dog shows. Continuing her passions, Vonda served as a nurse for 21 years while in Chester, which suited her well, as she loved to care for others in both her professional and personal life.

In 2010, she met the love of her life, Robert (Bob) Wilkes. Shortly after, she moved to join him in Quintette, California and they “got hitched” in Virginia City, Nevada, which started a new and exciting chapter in her life. Many wonderful memories were made and good times were shared with having housefuls of guests, dinner parties on the back deck, winter nights at the infamous fire pit, all-day Jeep rides through the mountains, and relaxing boat rides on the local lakes, where she was known as “queen of the party-barge.”

Vonda had a lively spirit and was fond of nature and wildlife. She adored her flower garden, bird baths and feeders. She was regularly visited by the birds, the fox, and the fascinating flying squirrels. It truly brought her joy. She was a kind-hearted mother to numerous pets throughout her life, including her beloved dogs Fritz, Biscuit, Mischief, and Kyia.

Bob and Vonda traveled thousands of miles in their RV, camping and touring many destinations throughout the west. Some of Vonda’s favorites included Mattole Beach in northern California, Death Valley National Park, and Deadwood, South Dakota. She was a huge fan of history and enjoyed exploring ghost towns and old mines during their journeys. Vonda was a prolific reader and devoured numerous books, while relaxing cozy on the couch or curled up before bed. She was also very fond of great coloring books, from nature-themed to adult-themed, she loved to spend time out on the deck, coloring with her girlfriends whenever possible, enjoying cocktails, singing along to her favorite tunes, and creating long-lasting memories.

Vonda’s inviting smile and contagious laughter will be missed by all who had met her and had the blessing of her company.

Her final resting place will be in her husband’s hometown of Libby, Montana. A private celebration of life will be held on October 17. If interested in attending, please contact the family or email [email protected] details.