Skip to content
Opinion Where I Stand
August 8, 2021 Editor 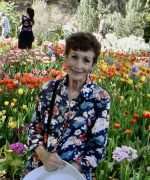 It was heartbreaking to see my first home In Plumas County in Greenville go down from that horrific fire a few days ago.  I was watching with tears  what was happening constantly.

I have much empathy for my old friends there who lost their homes and no doubt those who read the Indian Valley Record where I worked in 1978-1980 and will miss reading this newspaper that people enjoyed. It was a part of Feather Publishing Co. in Quincy where my son, Kevin Mallory, worked until his retirement after 37 years as the longest-working employee.

Besides working in the office taking ads, I had the pleasure of accompanying the editor to the home of the man who had a radio show who had met Clint Eastwood who was about to film the area for a movie.  The editor interviewed him.  Even though I had seen him in movies, and then stood right next to him, I thought he was just a regular guy even though he had been a Western star and is still famous today.

I also had the pleasure of interviewing certain people in Greenville who had had fascinating lives and wrote their about their previous lives  as well as ones with interesting lives during their residences in Greenville.  Wish I could get them from Feather Publishing if someone know where they might be in the files.

I would like to dedicate the years I worked at the Indian Valley Record as a most significant time period because that’s how I learned about the first Chinese who came to Plumas County during the Gold Rush in the late 1850s.  I happened to drive out to Taylorsville in Indian Valley near Greenville one afternoon and saw the sign, “China Grade,” a graveled road leading up to Mt. Hough  that to me is reminiscent of a Rocky Mt. range.   I had never been told that Chinese had been in this vicinity.

I was inquisitive so the immediate neighbors advised me to get in touch with the curator of the Taylorsville Museum which I did, and he gave me a little history of his boyhood in this town with Chinese boys around his age.  So several Chinese lived in that area as well as in Meadow Valley where they had established their own Chinatown there.  After reading information at the Plumas County Museum as well as at the Plumas Co. Courthouse, my interest grew as I learned  more and more about these people from China who worked so hard for their families back home.  Unfortunately, they were persecuted here and blamed for taking jobs away from Americans, which was not true at all.  Thus,  they suffered greatly due to immigration problems later in the 1880s and as a result, many families were separated from each other for decades.  Some of their stories are written on the walls of Angel Island while they were held up waiting for months  at the Immigration stations to come into the country.

I wrote a documentary that I gave to UC at Chico, and later wrote a four-hour, two-part fact-based fictional screenplay that I sent to Hong Kong that was never bought or used to my knowledge.  These true to life stories of the Chinese in California were the basis of my desire to travel to China years later and live there and also teach English in three different cities.

Therefore, these ventures would possibly not have happened if I had not been working at the Indian Valley Record in my then hometown of Greenville and its beautiful Indian Valley that I loved driving around and up to Genesse and back through Taylorsville and Crescent Mills.  Also, it was a pleasure to drive up to Chester via Lake Almanor, besides driving on the graveled roads over the top of the valley while it was still green and fervent.

Therefore, I look back with heartfelt feelings and tears of those years when this little town was the scene of my children’s schooling and a place that was safe and secure to drive them up to Round Valley Lake, in addition to look over Mt. Hough down into the valley.

In the meantime, I hope and pray that all of you in Greenville can get back on your feet financially and obtain some housing just as my son, Kevin, who had moved from Plumas County to Paradise and lost his home in that fire and now has a “fixer-upper,” do not lose faith that you will find a home too even if for just a short time until something else turns up.

Letter to the Editor: The state of Spanish Springs Ranch breaks my heart

In reference to Spanish Springs Ranch (in Meadow Valley), it just breaks my heart to see it in its current…

Letter to the Editor: Post-Election Thanksgiving

There is much to celebrate after the recent election.  We have reason to give thanks. First, give thanks for dedicated…

Letter to the Editor: Give thanks and take a break

Have a Happy Thanksgiving and take a break. This week is a great time to give thanks and also take…

Letter to the Editor: Thank you Plumas News

Tis’ the season of giving thanks and being grateful. So I just wanted to reach out to say THANK YOU…

Nick recently wrote a letter in about checking all the facts about these letters before buying into them. I…

Letter to the Editor: Another history lesson

You’re absolutely right, January 6, 2022 was a relatively routine day in Congress. Just to make sure, I accessed the…