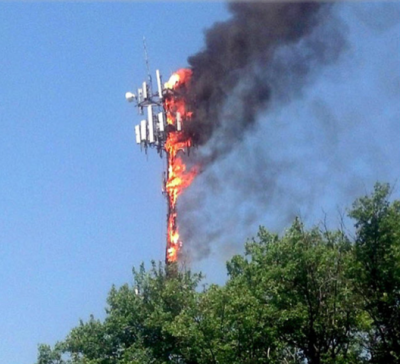 A new cell tower is being planned by Verizon, 200 yards from Eastern Plumas Health Care (EPHC) where helicopters regularly take off and land to evacuate critically ill patients to Reno. Verizon says the tower is safe, relying on FAA regulations that say helicopters are not allowed to fly within 500 ft. of tall trees, but EPHC Directors disagree and say that in reality, the tower would pose a direct threat to the hospital’s operations:
“Helicopters land at our hospital frequently, at all times of day and night, under widely varying weather conditions. A tower so close to the landing zone presents an additional risk to our helicopters. A collision of a helicopter with a cell phone tower would likely cause the death of a patient, a nurse, a paramedic and a pilot.”
Although the potential for a CareFlight helicopter collision was brought to the attention of Verizon back in January, it turns out that Verizon did not consult—or even inform—CareFlight about its tower plans. This is a stunning oversight for a planning process, and adds questions about whether other aspects of the tower’s safety were adequately considered, including fire risk (and vulnerability), and RF microwave emissions that are increasingly being singled out as a toxic agent responsible for disease.
Instead, Verizon has approached safety issues with its proposed tower by having their attorneys cite federal statutes while ignoring local conditions, and failing to reach out to even the most important stakeholders.
It is not apparent from documents obtained from the city that Verizon is even aware that they are planning a tower in the middle of a helicopter flight path. For example, no lights are proposed for the fake cell tower tree which would tower over surrounding trees.
As a trained planner, who has worked on many transportation and telecommunications infrastructure projects, this lack of proper planning is alarming. The first thing to do when considering a new infrastructure project is ask who will be affected, and then speak with them to gather local knowledge that could save time, money and lives down the road. That this basic step of proper planning was skipped by Verizon is a worrying sign, and an indication that the company does not care about the community’s safety, but is only concerned with slapping a tower in as quickly and cheaply as possible.
If Portola City Council is truly concerned about the safety of the hospital and the community at large, they should deny Verizon’s permit at the telephone hearing Monday night. Whether or not you believe new cell towers are necessary or a good thing for our community, It is in everybody’s interest to ensure that if these projects do go forward, they are done in a manner that avoids harmful impact to community residents and healthcare employees and patients.
On the contrary, this current plan would have a much larger negative impact on community safety and property values relative to other options. Verizon’s “search ring” for identifying a site for their new tower was limited to a few blocks in South Portola. They did not consider Beckwourth Peak—the obvious choice and one encouraged by the county’s policy of “co-locating” with other towers, and mentioned by many speakers at hearings earlier this year. Apparently the rent is too high on Beckwourth, and Verizon were looking for a bargain in town. No pilot or nurse or patient should have to pay for Verizon’s penny pinching with their lives.
A much more economical and less harmful alternative to a new cell tower would be to improve the area’s fiber optic / cable / copper network so that the demand for streaming movies and videos could be channeled more efficiently through a wire. This means less waiting, less buffering, higher speeds, and less risk of someone snooping on your communications.
No one ever talks about how new fiber optic lines will lower property values (just the opposite!), or how a phone line risks burning down a community. That’s because wired communications are unobtrusive and relatively harmless. They contribute to the economic wellbeing of a community without the safety risks. They are an investment in the future. If more people utilized wired connections, the reliability and speed of wireless services would also improve.
Let’s not put our community in harm’s way by approving the first corporate tower application that comes our way. It’s time to listen to the voices of those who have worked at the hospital for years serving our community, and the pilots who take us to Reno when our lives are on the line.
Please voice your opposition to the Verizon project to City Council and let them know, “NOT NEXT TO OUR HOSPITAL AND CLINIC!” This is a vital issue:  we must protect the safe access of Care Flight to EPHC, prevent harmful radiation exposure to employees and patients, protect human and environmental health and community aesthetic appearance, and avoid new fire hazards near our precious emergency care facilities.
Hearing info: this coming Monday, October 26th at 6pm, and you can participate remotely by telephone by calling 1.669.900.6833; Meeting ID: 358 306 7836. (To mute or unmute your phone during the telephonic Zoom meeting press: *6) Comments sent in advance to [email protected] will also be read at the hearing upon request.
Plumas Wired is a non-partisan group of Plumas County residents with the goal of expanding safer, more reliable and affordable wired communications (such as quality copper landlines, cable, and fiber optic internet). We raise awareness about the known safety risks of wireless technology and advocate for local laws that keep communities connected and safe, putting people—not the interests of telecom companies—first. For more information, see PlumasWired.org

Letter to the Editor: The state of Spanish Springs Ranch breaks my heart

In reference to Spanish Springs Ranch (in Meadow Valley), it just breaks my heart to see it in its current…

Letter to the Editor: Post-Election Thanksgiving

There is much to celebrate after the recent election.  We have reason to give thanks. First, give thanks for dedicated…

Letter to the Editor: Give thanks and take a break

Have a Happy Thanksgiving and take a break. This week is a great time to give thanks and also take…

Letter to the Editor: Thank you Plumas News

Tis’ the season of giving thanks and being grateful. So I just wanted to reach out to say THANK YOU…

Nick recently wrote a letter in about checking all the facts about these letters before buying into them. I…

Letter to the Editor: Another history lesson

You’re absolutely right, January 6, 2022 was a relatively routine day in Congress. Just to make sure, I accessed the…