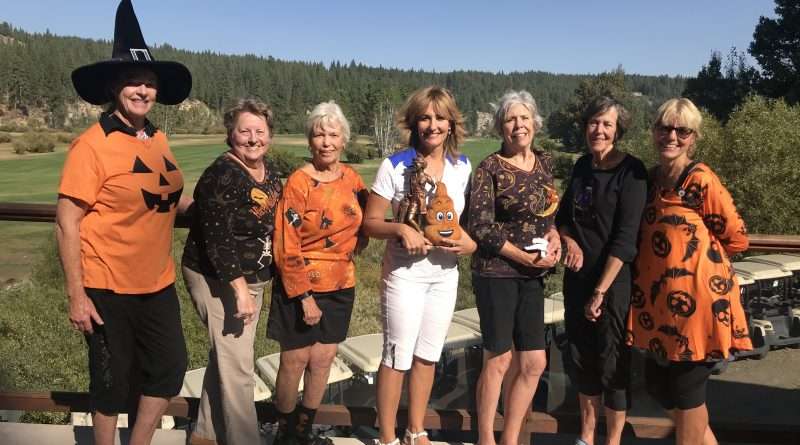 Plumas Pines Golf Course in Blairsden will be the site for the first annual QHS Booster Club Golf Fundraiser on Saturday, Oct. 17. That’s right! A High School sports event, well, sort of. QHS staff, coaches, alumni, students and friends of Quincy Athletics will gather on the golf course for a day of “fun and camaraderie.” The price for golf is $100 per person and includes tournament entry, driving range balls, contest holes, and lunch at the turn. There are numerous tournament sponsorships available to help offset the costs of the golf tournament. To participate, donate or ask questions, contact QHS Athletic Director Jason Hawkins (805) 280-2658 or email [email protected]

The Graeagle Meadows Men’s Golf Club played two games Sept. 30th. Low gross was the first and the second was low net. The winner of low gross was John Capdeville, who shot an 80, and in second place was Norm Nichols with an 81.

The net competition winner was Norm Nichols with a score of 68 and two players, Jack Gilbert and Andy Knudsen, tied with the score of 69. There were a total of four skins won this day. Dennis Flynn shot a net 2 on hole #1 to take the first skin. Bob Mcilroy took hole #3 with a net 2, John Capdeville took hole #6 with a 2 and Bert Bellows grabbed #10 with a net 2.

Friday’s second game was a 2-man competition called “In the Box.” The play of the game is both player’s score are used on par 3’s, best ball on par 4’s, and on par 5’s one player is “In the Box” and his score is the only one counted.

In two weeks GMGA will have our coup de gras known as “The Kinkley Klassic.” In this event the course is somewhat rearranged so that players shoot from tees that are specially set up while shooting to the real holes. One such “hole” is the combination of the first tee to the second green. This tournament is the grand finale to the season and always an exciting challenge to one’s golf skills.

Inquiries about membership in the Graeagle Men’s Golf Association can be submitted to [email protected], or visit website at gmeadowsclubs.com.

Graeagle Meadows Women’s Golf Club hosted its 35th Annual Turd Tournament Oct. 1. The Turd Tournament is so named because at this time of year the fairways are aerated which, in days of old, left mud plugs (turds) all over the golf course. The weather was sunny, but very smoky, and the players got into a Halloween theme with their attire. There was a “treat” on many holes (such as a free drop on the far side of the river) to make things more interesting, and of course pumpkin bowls of candy on several tee boxes. Play was followed by a festive luncheon at The Restaurant at Graeagle Meadows.

The 2020 Turd Queen is GMWGC Captain (president) Renee Miller, whose low net score of 59 included a hole in one on hole #3, with a tee shot over the Feather River (wow!).

The team game was the best two net balls of the foursome. First Place, went to the team of Cynthia Baldwin, Debbie Fuetsh, Renee Miller and Dee Walker, with a team net score of 112 The second place team was Holly Anderson, Cheryl Brennan, Lois Childress and Carol Miller (114); and, in third place was the team of Mikie Burdick, Cathy Churchill, Alaine Flynn and a blind draw (121). Renee Miller captured closest to the pin honors on hole #3 with her hole in one, and Alaine Flynn took second closest with a 13 foot 3 inches.

Send your golf news and photos to [email protected] for posting in the online “paper” for Plumas County news!