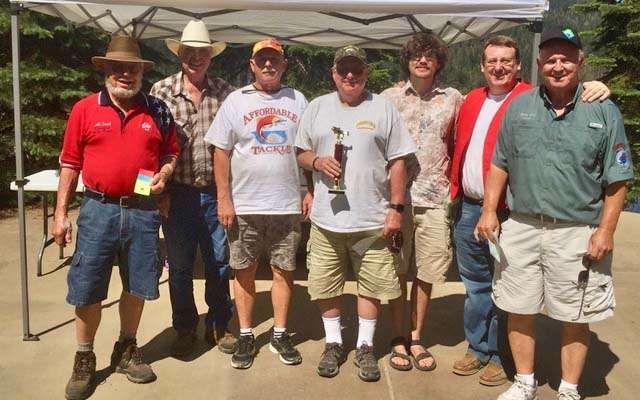 Samantha Hight, Buck Smith and Brandon Smith were the big winners of the Kokanee Fishing Derby that began at 6 a.m. on Aug. 19 from Lakeshore Resort at Bucks Lake. The winning weight for the team’s total of three fish was 34.20 ounces.

The sky was blue, the water and air clear, and the fish were biting.

Team number one bested the second place team of Gary Coe and John Lico. Coe and Lico weighed in with 32.80 ounces of fresh fish. In third place, Jack Shultz and Carol Voris were right behind weighing in with 32.70 ounces. Gordon Todd and Kasey Weaver came in fourth with 31.30 ounces and Kaye and Rand Smith brought in 31.25 ounces.

Cody Hight was the Junior Winner with a kokanee weighing 11.10 ounces.

With a total weight of 30.95 ounces from three kokanee, the sixth place win was taken by Affordable Tackle owner Steve Peckham and Jim Travis.

“We had a wonderful time,” said Coe. “We caught lots of fish and raised funds to support the area and Feather River College.” With a successful tournament in the bag, Coe added, “It is beautiful country and many thanks to the lodge.”

For more information on the last Kokanee Power tournament or next year’s schedule, visit kokaneepower.org.