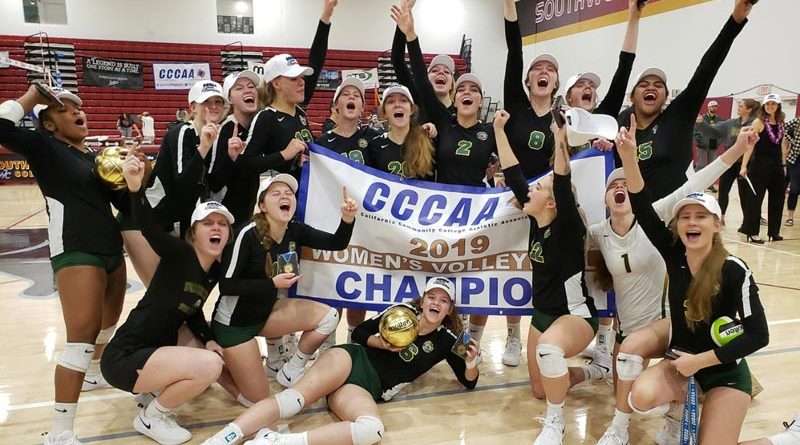 The Eagles were honored in an escorted parade through Quincy at noon on Dec. 11 to commemorate the achievements the team attained at the 2019 State Championship Volleyball competition in Chula Vista on Dec. 8.

The lady Eagles were joined by teary coaches and athletic staff as the FRC float paraded through town — the town that supported the team for the 14 years FRC head coach Sarah Ritchie has been building toward her State Championship goal.

FRC Athletic Director Merle Trueblood, FRC President Kevin Trutna and coach Ritchie addressed the crowd that greeted the team on the steps of the county courthouse. “The question I was asked most frequently [at the championships in Chula Vista] was, did you bring the whole town with you?” said Trutna as he spoke to the crowd.

Truly it was a good question as announcers throughout the championship continued to comment on the size of the fan base the Eagles had at the games and the enthusiasm they brought with them for the Eagles. “It was like we had the home court advantage,” said coach Ritchie, “and we are the smallest junior college with sports in California.”

The Eagle team soaked up praise at the courthouse for their accomplishments in 2019 as a few team members spoke to the crowd thanking them for showing up in the rain as they had throughout the season.

“Every one of these kids was the best. They worked hard grinding every day to become their best version and they bought into everything. They became good people, good students, grinding every day,” said Ritchie. “They re-inspired me for coaching. I wanted to get up every day and be a better coach. I knew we were going to win.”

The primary message from the team to the crowd was one of gratitude. Gratitude for the support and acknowledgement they received from townspeople all season long. The athletes said they appreciated the many greetings from fans in the grocery store, the post office and all around town. But the biggest thanks from the champs came for the tough training provided from coach Ritchie and her clear vision of the State Championship for the team.

“I knew we had a lot of good kids this year,” said Ritchie as she aimed the Eagles toward the “elusive gold banner.” As the vans were getting loaded up with gear for the long trip to San Diego to play in the championship, coach Ritchie did her best to help the dream materialize for the Eagles. “I took the girls into the gym before we left and told them to visualize the State Championship gold banner hanging on the wall.”

And, it worked. That and the hours and hours of dedicated training the team put in. The result is the women are very confident. “We get more confident with game five,” said coach Ritchie of a situation she said seems to make other teams more nervous and careful. “The team didn’t look like this when they arrived. They are bigger, stronger and faster.” All that is a result of daily working out and pushing their strength to the limits. “We didn’t go out for dinner during the championships,” said Ritchie. “We ate in and watched hours and hours of film,” in preparation for the championship matches.

Ritchie was further supported by the years of effort from her former FRC volleyball assistant coaches. “Every old coach I have had flew in to support us in the championship,” said Ritchie. “They all showed up, even one from Hawaii.”