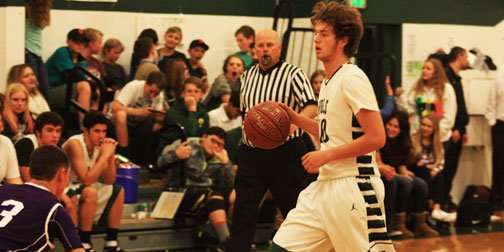 The Chester High School boys’ basketball team took down county foe Portola by a score of 71-61 on Dec. 6 in Chester.

Chester now has a current record of 5-3 while the Tigers possess a 3-5 record.

The Volcanoes started out the game strong behind post player Brandon Dye. Dye got the momentum started for Chester with a fade away jumper from the elbow, before following up with a deep three-pointer on the next possession.

On the ensuing possession for the Tigers, Kodi Lowdermilk dropped in a three-pointer that swung momentum in Portola’s favor as the Tiger offense came alive.

Mitch Pearson and Hunter Price chipped in two more deep balls and Portola jumped out to a 9-5 lead.

After a back and forth opening quarter, thanks to the long-range shots, Portola led 18-14.

However, the Vols came fighting back in the second quarter, and pulled the game to a 33-31 score at halftime.

The second half of the ballgame brought more back and forth action for the majority of the third quarter, when Chester took the lead 38-35 midway through.

At the end of the third, the score was even at 45 heading into the final quarter of play.

Chester came storming onto the court and poured on the points, outscoring the Tigers 26-16 in the final minutes of play to take the 71-61 victory.

No stats were available for Chester at press time.

Kodi Lowdermilk led the way for Portola with 20 points. Dom Vukobradovich contributed 11 points, while Antonio Maddalena grabbed his third double-double of the season with 10 points and 10 rebounds.

The Lady Vols now possess a record of 6-1 overall while Portola holds a 1-7 record.

a three-pointer fly in the Tigers loss to Chester on Dec. 6.