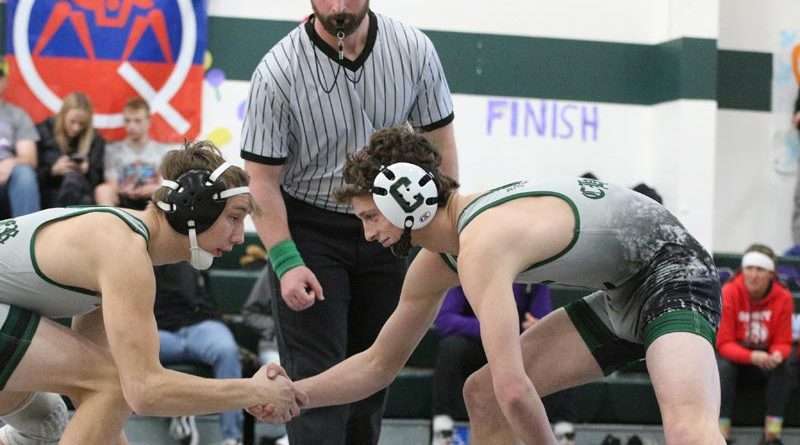 Both boys have been top competitor all their years on the CHS team. Kremer missed a few tournaments due to an injury, which can be rough when it’s a senior year, but he was on the mats competing in Chester last weekend in the Shasta Cascade League championships.

Kremer started wrestling when he was just 5 years old. Longacre began in second grade. The boys have a long history, wrestling at the same weight this year, and finished off the end of their final championship match with a skit of sorts.

Kremer “threw” an imaginary fireball at Longacre who promptly fell straight back while Kremer advanced to deliver the final “shot.” The crowd enjoyed the play acting almost as much as the boys did.

Bonner Montgomery took first place in the league at 138 pounds. Bonner started wrestling when he was 3 years old.

“Chester had five out of six wrestlers place and four in the finals,” said head coach Clay Montgomery. “Two firsts, two seconds and one third.”

Chester High’s Logan Oswold placed third at 138 pounds. He wrestled a year at age 7 then stopped. Oswold picked up the sport again, wrestling for CHS for the 2018/2019 season and again this year.

Parker Montgomery placed second in the league tournament at 145 pounds. As a freshman, this is his first year in high school competitions, “but he started wrestling when he was 2 1/2,” said his mom Kristen Montgomery.

Joe Garrett started wresting in 2019. He didn’t win either of his matches at the league tournament in Chester, but gave his competitors a challenge during his two bouts.

The Volcanoes will travel to Alturas this Saturday, Feb. 15, in the Small School Sub Section and the North Section Masters takes place Saturday and Sunday, Feb. 21-22, in Redding. The big event for wrestling is the State Championships in Bakersfield on Feb. 27-29.