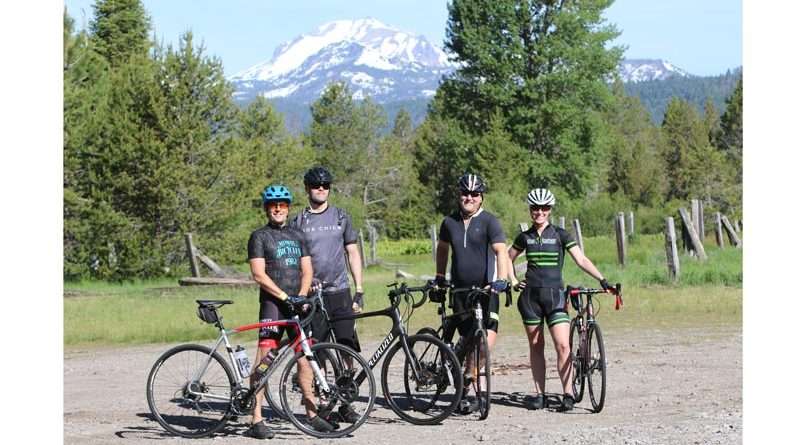 There were over 200 riders this year in the Mile High 100 annual bicycle event out of Chester. “Our ride is one of the few remaining ‘traditional’ century rides; the route is paved the whole way,” said event director and biking enthusiast Randy Robbins.

The distances of the three available routes were 107 miles, 56 and 33 miles. Only the 33-mile course omitted a mile-high Warner Valley section.

The “mile high” comes from the elevation at the top of Chester Warner Valley Road, “It’s just over a mile high near the turnaround,” said Robbins. “Century riders climb approximately 4,400 feet during the ride.”

The surrounding woods bordering the full and metric century routes up to Drakesbad were beautiful. Someone(s) has been hard at work thinning the forest to reduce fire fuel, but there were still plenty of trees to shade the entirety of the ride up toward Mount Lassen. Event participants were prepared for cold weather temps including face coverings and multi-layered jackets.

After the climb, and returning descent, all three routes led riders on a trek around the still shady eastern side of Lake Almanor. At the Canyon Dam juncture, the courses separated. Metric century and half century riders headed up the west side of the lake. Centurions traveled to Greenville and then down along the eastern edges of a much warmer Indian Valley. A fine luncheon awaited riders in Taylorsville prepared by Young’s Market staff members.

After a small feast that would still allow for the long ride back, cyclists completed the loop by riding north to Lake Almanor, this time hugging the west side of the shoreline.

The 100-mile mark hits just before Plumas Pines. “Lots of riders stop in to celebrate,” said Robbins and there is much to celebrate. The event is riding for its 38th year having smoothly made the transition from a Chamber of Commerce-organized event to being hosted by Almanor Recreation and Park District just last year.

They [ARPD] needed someone to take the reins and called on Randy Robbins of Susanville. Robbins’ experience as president of the Susanville Area Bicycle Association seemed a good fit. Robbins became the inaugural 2018 event director. Things are going very well, “I’ll be back next year,” anticipated Robbins.

Bicyclists registered for the event came from as far away as Rhode Island, but the majority of participants came from Chico, Sacramento, Reno, the Bay Area and the closest riders were from Plumas and Lassen counties. Pairs on tandem bikes and even recumbent cycles were in the mix on Father’s Day.

Alden Hauer and his pop Kirk came from Chico. “This is my third big ride,” said 9-year-old Alden. “But we have done lots of other rides,” added proud father Kirk as the pair rounded the west end of Lake Almanor on the final leg of the ride.

“It’s a great ride,” said Shawn Volland. He came up for the century with three friends. “We call ourselves the BEER riders: Bring Everything to Every Ride,” said Volland. His prepared partners on the ride were Brandon Sledge, John Goens and Jennefer Traynor, all from Chico. “We will definitely come back and ride the full century,” said Volland.

The foursome tried the metric century for their first crack at the ride. “Everyone associated with the ride was very friendly and the goodie bag was great. The mountain and the lake views were spectacular,” said an excited Volland in retrospect, “but don’t tell anybody, we want to keep it to ourselves. We were bummed we missed the tacos. We heard they were great, but we really liked Italian food and the Quintopia brew.”

Rob Moore of Reno was the first to arrive at Young’s Market along the century route. When asked if he ever rode the Tour de Manure in Sierraville, which as of late occurs on the same weekend, Moore said, “That’s my training ride. Sierraville is closer to home, but this 108-mile ride is a real challenge for me.” The Reno rider has peddled the Chester Mile High 100 around Lake Almanor and Indian Valley “10 to 12 times,” said Moore. Century rider Frank Winters of Susanville skipped the luncheon and peddled right on through therefore becoming the lead rider.

Second and third in line at the riders’ feast at Young’s Market were Bob Smith and John Musselman of Santa Rosa. Both sported shirts from the Sebastopol Bike Center. “I’ve done the ride six years,” said Smith. “It is tremendously improved over the years, they have really stepped it up.” Actually, the only comments heard by this reporter were positive. Riders ooh’ed and ahh’ed over the views, the rest stops, the fabulous lunch, the weather and the friendly people.

“Quintopia Brewing came over from Quincy to pour for all the finishers and Paisans Italian Food Truck came from Reno to serve lunch,” said Robbins. The riders paid with sweat, all others paid cash.