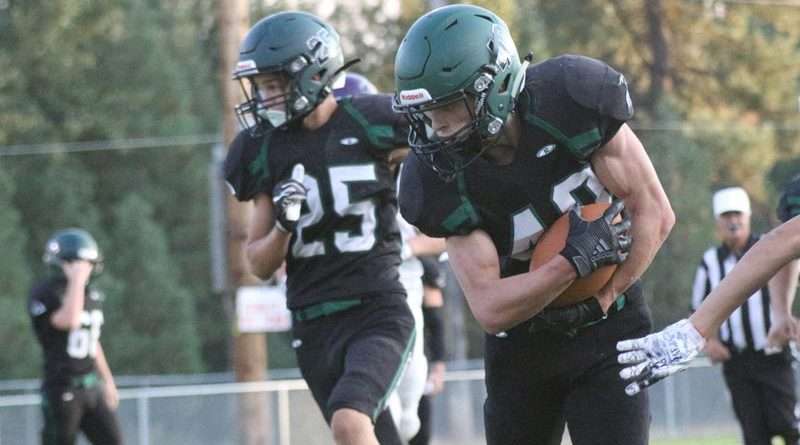 Collum Kremer has the ball and he is hanging on flanked by freshman Logan Oswald, no. 25. Photo by Mari Erin Roth

The Chester High School Volcanoes have taken a running start at the competition and the momentum carried them all the way through the CHS Homecoming game to win 56 to 6.

Taking the field in front of their fans, the Volcanoes continued their undefeated streak and made it six in a row for the team.

The Chester boys took on the Mercy Warriors from Red Bluff and scored through the air, on the ground, and on defense.

“We had interception returns, we had punt returns,” said coach T.J. Ragan. The score was 56-0 just four minutes into the second quarter.

The Volcanoes’ dominant performance provided a chance for everyone to play. “It was an opportunity to play young guys,” Ragan said.

The Volcanoes are a young team. Of the 18 players, there are just four seniors, a couple of juniors and the remainder freshmen and sophomores.

At Chester the focus is on team, not individual players. When asked if there were any stats for the game, Ragan explained that they “don’t do stats” because the goal is to create a team atmosphere. “It’s all about us, the unit success.”

The Mercy Warriors scored a touchdown, but even though the score was so uneven, Ragan said that their team members expressed how “great it was” to play against the Volcanoes. The Warriors’ record going into the game was 1-4; the Volcanoes had a 5-0 record.

Next up for the Volcanoes is a match this Friday with the Herlong Vikings, again at 6 p.m.