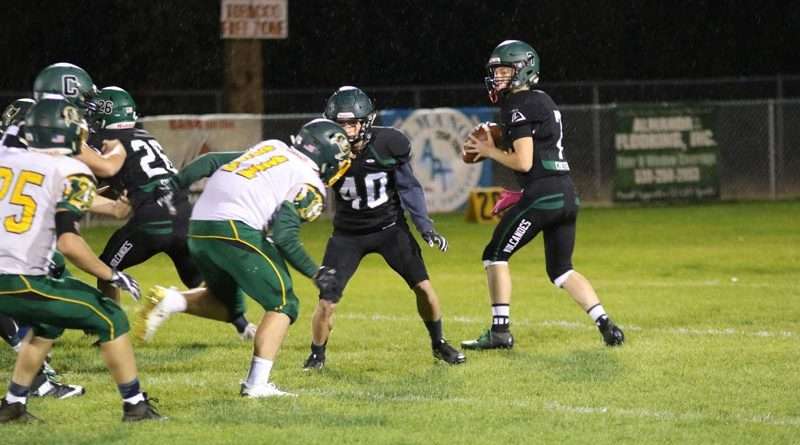 The Chester Volcanoes were ready to receive their guests from Burney, the Raiders, for a wet game on the CHS home field Oct. 5. The Vols put on their fierce faces and won 47-14 in front of a full stadium of fans. That makes three wins in a row for Volcano football.

The Chester boys are 5-1 overall and stand with a 3-1 record for the league. The only game the Vols lost was an away game against Etna. The next three games for CHS are away games followed by a final home game for the season.

Then the Volcanoes will meet on the Feather River College field with their rivals, the Quincy Trojans, Friday, Oct. 19.

The QHS boys are 3-3 after winning a game last week against the Portola Tigers 35-28 and are known for rising to rival competition. If history proves to repeat, the stands will be packed and fans will be assured a good exciting game starting at 6 p.m.

The Volcanoes final away game before returning to CHS is in Fall River against the Bulldogs. With a 6-0 record, the Fall River team has set a pattern of coming out of the gate harder than the Vols, so far. They are averaging 36 points a game to Chester’s 22. The Vols have a good quarterback sack record compared to the Bulldogs so Fall River better watch out for that. The team leaders are fairly close — CHS’ Michael Bereznak with an average of 121.8 yards per game and Fall River quarterback Gavin Dobson with 129; 102 of that in passing. Good news for Chester, they also have sophomore quarterback Kameron Stelzriede passing an average of 97 yards per game.

The final contest of the season is further off, but still less than a month away. Out of the gate, the Biggs Wolverines are starting out slower than the Volcanoes. Biggs has a 2-4 record overall and even though the Wolverines are averaging more points per game than the Vols, they are not currently making a habit of outscoring their opponents. That match up with Biggs will be Friday, Nov. 2, at 7 p.m., on the big Chester green, or white perhaps.