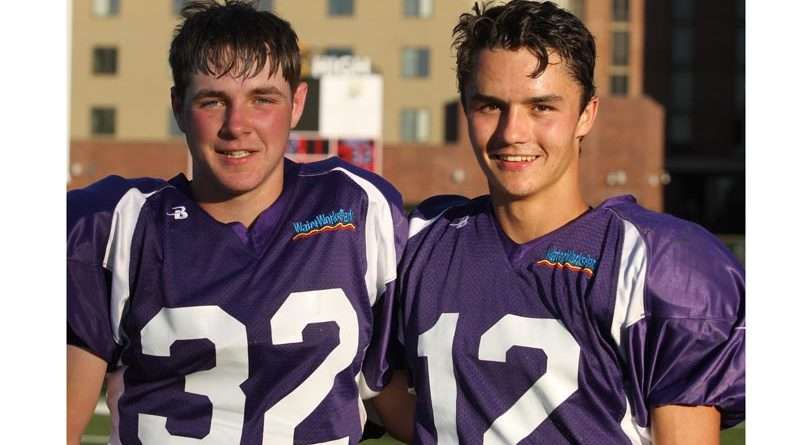 “It was a great opportunity for our 13 athletes,” said Greenville High head football coach and guest All Star coach for the South 8-Man team, “ending their careers playing with so many of the students they had previously played only against in the past. They were able to swap stories and learn about how (other) teams do things differently.”

The first event, the 8-man game, was exciting from the sidelines. Greenville players Tristin Clark and Colton Lawson showed off their polished teamwork in the earlier parts of the first half with a series of passes from Clark with successful receptions from Lawson. The duo’s plays were short lived as a dynamic number 7, Blake Wilson from Mercy, was inserted into the quarterback slot. By the half, the North led with the score 24-14.

“Stats were not kept for the game,” said event director Ray Odom, but Joe Summers scored three touchdowns, as he high stepped with long dramatic runs down the field evading the reaching hands of multiple Northern defensive team members. Summers’ big run after the half brought the score to 20-24.

The North picked up a safety from South quarterback Wilson, a player with an incredible arm, but a knack for getting sacked or cornered waaaaay in the back. The 2-point safety was awarded for intentional grounding in the end zone, 26-20 for the North.

Summers scored again with a 38-yard run to tie the game at 26-26 with eight minutes left in the game. The North managed another score to bring the score to 32-26. With 17 seconds remaining, Summers captured the ball and made a mad dash but was interrupted. With one second left, Lawson caught a pass and made a run for it but he too was stopped by the North on his way to score.

“While it was disappointing to lose a close game, I think it was a tribute to our players’ tenacity to rally from a two-touchdown deficit to nearly win. I am especially proud of the effort from Greenville’s Tristin Clark and Colton Lawson,” said coach Dave Keller.

The 11-man game was equally exciting and enjoyed cooler temperatures which made things much nicer. The stadium really filled out for the second game of the annual All Star football series packing the parking lot and all overflow lots as well. The Lions Club pulled-pork sandwiches, were a big hit with the crowd once the sun went down.

Three Plumas boys were included on the team for the North: Dominic Rinetti of Quincy, Chandler Ross of Portola and Tyler Davidge of Chester.

The South team scored twice in the first six minutes of the first quarter. This was a turn of events as the Northern team has won all but one of the previous annual matches in the last decade.

By the time the half rolled around, the North was on the scoreboard, 13-6, but still trailing.

Rinetti received the least amount of time on the field in the first half and could be spotted itching and ready to go. Fortunately he appeared more in the second half, but with seven other players available as wide receivers, six others as running back, four available as safety, the QHS Trojan was on the sidelines more than he was used to. Rinetti did perform well when he finally got on the field and was rewarded with playtime as the Chico coach used him in the second half.

Portola Chandler Ross spent a fair amount of time in the game. He was noticeably the tallest player on the team and easy to spot. Ross was in the thick of the action working hard and playing well.

In the second half of the game the North scored again with seven minutes left in the quarter, but the conversion to pull into the lead was intercepted. The South trailed 13-12, the final score of the game.

The evening game had fewer touchdowns, but was equally close and exciting for the fans. The single point victory marked the second time in 10 years that the South has come out on top at the Lions All Star game.