The Feather River Eagles made their second game of a short season a big win as the Siskiyous Eagles came to Quincy to play ball. The Eagles (both FRC and Siskiyous team mascots are Eagles), played a close game with the first half ending 15-14 in favor of the visiting Siskiyous.

In the first quarter, FRC made its move and got on the board first when Taitum Brumfiel carried a 28-yard pass from FRC quarterback Jared Taylor into the end zone. Chysen Lagunes’ kick was good and the Quincy team led 7-0. Siskiyous squeaked onto the board with just 18 seconds remaining in the first quarter with a team safety, 7-2 FRC.

Siskiyous was only warming up and right in the beginning of the second quarter they scored with a TD and made a successful 2-point run for 9-7 taking the lead from the Quincy home team. Solidifying their lead, Siskiyous eventually scored after a 12-play effort for 82 yards. With a failed kick the score was 15-7 for the visitors. Feather River didn’t let the quarter end that way though, Tayvonne Miller wrapped up a 9-play drive with a 2-yard run to score for the Quincy Feather River Eagles. A good kick from Lagunes made the score a close 15-14 with FRC trailing closely.

In the third quarter, FRC fought hard to gain 62 yards in 12 plays and the result was the game changer. Tanner Hall made a 6-yard run to score and a successful 2-point conversion pass by Taitum Brumfiel took the Feather River Eagles in to the lead for the winning game score of 22-15.

Feather River defense was led by Dominyke Edwards with 11 total tackles, 9 solo. Cole Eichele made 5 solo tackles for a total of 7. Tristan Catan and Hrotebert Quintero both brought in 5 tackles each.

Quarterback Jared Taylor had 14 completions of 17 pass attempts for 150 yards and no interceptions. Taylor carried the ball 15 times for 81 yards rushing. Thomas had five carries for 59 yards. Tanner Hall had 12 carries for 57 yards, Miller carried 11 times for 38 yards.

“It was a great team win,” Coach Nick Goulet said. “Each unit contributed and it was a game that called for that. I was proud of our coaches and players adapting to the elements against a Siskiyous team that usually thrives in those conditions.”

The Feather River Eagles host the Shasta Knights in a rematch Saturday, March 27. The final score with the two teams was 31-21 for Shasta. Fans are not permitted inside the stadium during the game that begins at 1 p.m., but can watch the livestream at https://www.facebook.com/Feather-River-College-Athletics-104750214527728 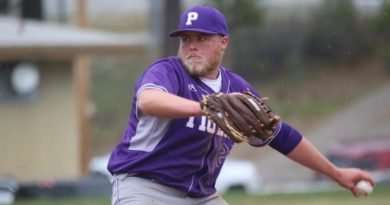 By Lauren Westmoreland [email protected] Hunter Cabral, a 2019 graduate of Portola Junior/Senior High School, has made headlines as the newest…

Conditions vary but the fish are good!

By Mari Erin Roth [email protected] The Greenville football team put up a good fight in Portola, 66-38, as they faced…