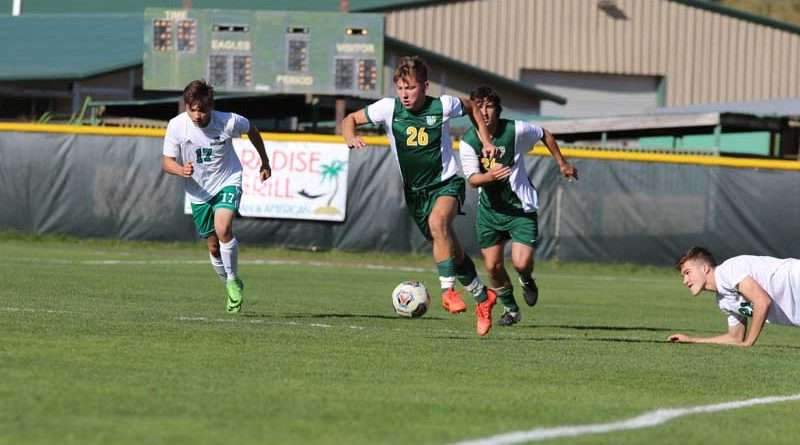 Leaving several Shasta College Knights in the dust, FRC men work together to get the ball to the Shasta goal and into the net in the matchup that took place at FRC on Oct. 3. Photos by Mari Erin Roth
Sports
October 23, 2017October 20, 2017 Mari Erin Roth, Sports Editor

The Feather River College men’s soccer team tied with the Butte Roadrunners on Oct. 10 on the FRC field. Mitchell Mcleod scored the goal for the Eagles in the first period, assisted by teammate Guido Battistini. Roadrunner David Gomez scored a goal in the second period, tying the game up for the final score.

Eagle Tom Kleywegt served as goalie for FRC the entire game. The Roadrunners made three goal attempts in the first period and five in the second. Kleywegt was able to deflect all but one.

The Eagles made two goal attempts each period and were first in the game to get a shot past the Roadrunner goalie, Francisco Noguera.

The Eagles are 6-3-2 overall and 3-1-1 in conference play. The Eagles have slipped to the number two spot behind the Lake Tahoe Coyotes who are on a three-game winning streak. Lassen trails FRC, followed by Butte, Siskiyous, Redwoods and lastly, Shasta.