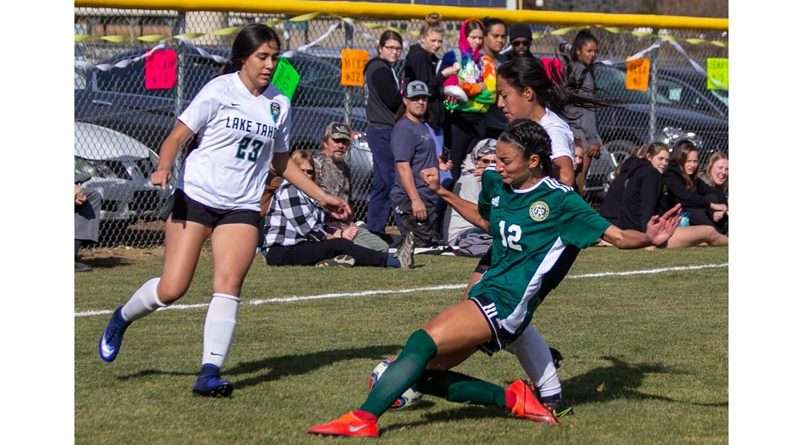 The Feather River College soccer teams are challenging teams from all over Northern California. In most cases, the men and women teams face the same challengers through the season on the road and for home games.

The weather has been incredibly cooperative thus far with only a hiccup of rain the end of September. Clear skies wrapped up the season Nov. 12 on the Feather River field.

The men finished their 19-game season scoring 66 goals. They averaged 3.47 goals per game. The Eagle men’s record is 11-4-4 and their conference record finalized at 8-1-3. This earned the men a third place behind Lake Tahoe, the team that they tied during their last home game Nov. 12, with a score of 2-2.

The Lake Tahoe Coyotes scored two goals in the first half of the game. Isaac Lomeli scored unassisted for the Eagles in the second half and then things got very interesting. Lake Tahoe stats for fouls were not yet entered at press time, but they had some and the Eagles were credited with 14.

Michael Dairo served as the Eagle goalie for the entire 90 minutes of the game and made three saves. The Tahoe goalie was much busier, having to make seven saves in the first half and four more in the second half, but then he received a red card and was taken out of the game with more than 10 minutes left in the game. The Eagles were down 2-1, but had 11 players on the field to the Tahoe 10. The substitute goalie had to make three more saves.

Then the Tahoe team lost another player off the field after receiving their second red card of the game. With less than two minutes to go, Louis Sanchez scored an unassisted goal to tie the match, 2-2. Energy was high and collisions happened all through the match. The Eagles really wanted to win the game, that was clear, but it just didn’t happen. The men finished the season in second place in conference behind the Coyotes.

FRC’s Joseph Scott took three shots at the goal during the big match with Tahoe; Luis Bugarin, Enrique Sierra and Lomeli took two shots each. Ariel Aviles and Sanchez both took one shot.

The Eagles made a strong play for the top seat with a hard run by winning or tying all of their final six games. The men lost 2-1 to Lake Tahoe on Sept. 18, but came back stronger with this tie Nov. 12.

Tahoe finishes 11-7-3 with 9-2-1 in conference. They take the second place spot behind the Butte Roadrunners, 9-0-2 in conference, and an 18-1-2 overall record. The FRC Eagles played Butte twice this year and tied them both matches: 0-0 on Oct. 10 and 1-1 on Nov. 5. “Tahoe only got second because they beat FRC once, overall FRC has a slightly better record … wait till next year,” said photographer Helen Lawson-Reyes.

Seeding for playoffs has not yet been announced. If the men make it into playoffs, you can read about their games here in the Sports Section.

The FRC soccer team challenged teams from all over California. The women finished conference 6-9-4 with a conference record of 6-2-2.

They finished the league in second place behind the Lake Tahoe Coyotes. The Nov. 12 game was a real nail-biter as the players and their hometown fans knew exactly what was on the line for that final game.

The three goals on the scoreboard at the end of the game were scored in the first half, with the second half a stalemate of determination and grit. Eagle Angelica Soto made a single shot that hit the mark in the Coyote goal to score. Ayana Weissenfluh took two shots and Isabella Robins attempted one shot. Alicia Duran served as goalie for the entire final game.

Seeding for finals will be coming soon. Hopefully the lady Eagles will be given a shot at the title. They were followed in the Golden Valley conference by Butte, Redwoods, Shasta, Siskiyous and Lassen, in that order. Golden Valley is one of 12 leagues competing in the state.