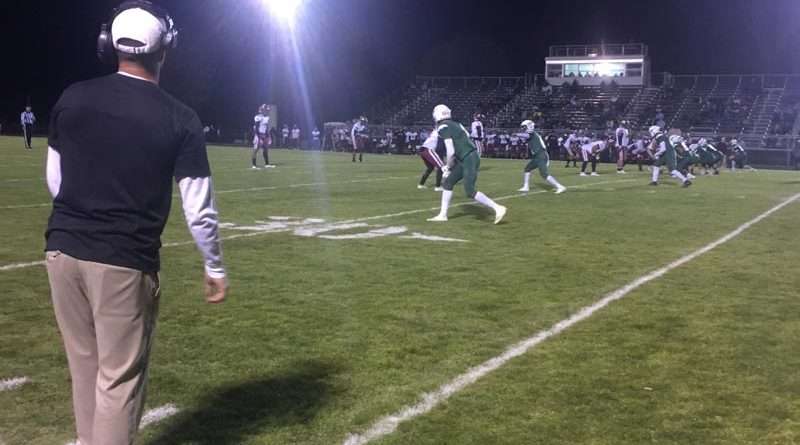 The Feather River College Eagles came home to roost Nov. 2 under clear skies, but freezing temperatures. Still, cold is much better than wet, and college football is a treat any day in Quincy. Fans piled into the stadium with sweets left over from Halloween, ready for a treat, and they were rewarded.

Although the Eagles lost to the visiting Sierra College Wolverines by a score of 41-21, the game was exciting to watch and filled with spectacular plays.

“The football team continues to work hard and are doing things the right way,” said FRC Athletic Director Merle Trueblood. “The coaching staff is committed to win the right way. The team commitment during practice, in the classroom, and in the community has been amazing …”

FRC head football coach Nick Goulet has had a challenge on his plate since coming to coach the Eagles. The team was 0-10 when Goulet took over three years ago. “We can only get better,” said the coach when we interviewed him preceding the start of his first FRC season. And they have, but it is a steep, steep climb. Goulet is an experienced and accomplished football coach. He came from the Bay Area where his coaching was rewarded with many wins and much success.

“They have come up short in the last few minutes of some games that could have went our way,” said Trueblood. The Eagles always put on a good show and it is fun to watch the college athletes display the skills that come with age and experience.

“They fight pretty hard,” said Goulet, “and I’m pretty proud of the way they play despite the obvious lack of success. They are a great group of kids.”

On the field Nov. 2 for the Eagle fans, FRC’s Jalen Dummett made a 5-yard run into the end zone to score for the Eagles in the second quarter, and with a good kick from Chysen Lagunes, evened the score, 7-7.

The Wolverines scored a few minutes later to take back the lead, 14-7. An Eagle team effort of three plays put Dummett in position to score with a 58-yard run and a good kick from Lagunes brought the Eagles to a tie once again, 14-14.

Taking the upper hand, the FRC men drove 99 yards in 11 plays to score. Lagunes provided another good kick for the Eagles to lead for the first time in the game, 21-14.

With just a handful of seconds left in the second quarter, Sierra kicked a 24-yard field goal to get closer, 17-21, but to still trail behind the Eagles at the half.

Returning in the third quarter, the Wolverines scored a TD, and supplied a failed kick, but the score was enough to take the lead 23-21. A team safety for Sierra followed to inch the Wolverines up a nudge, 25-21. The Eagles were holding the Wolverines back from crossing into the end zone so the Wolverines stuck with what worked. Sierra Kenyon Bowyer kicked another field goal, 28-yards this time, 28-21.

In the final quarter, Sierra scored two more touchdowns and Bowyer succeeded with one of his kicks for the final score, 41-21.

The Eagles played their final home game Nov. 9 with the Siskiyous Eagles and will play their final game of the season this Saturday, Nov. 16, with the American River College Beavers in Sacramento.