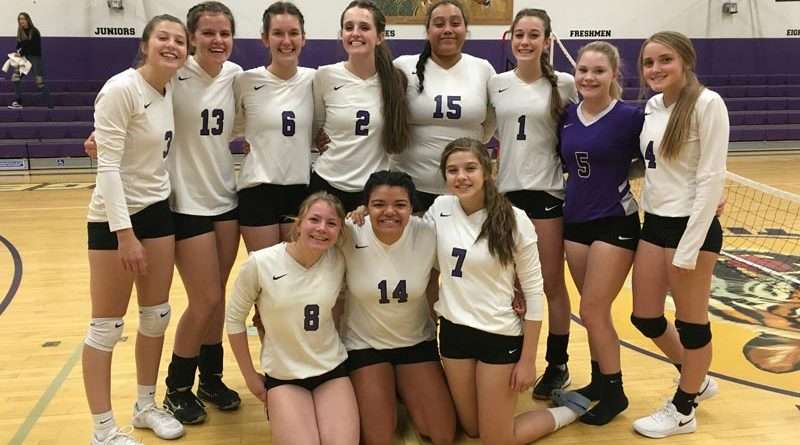 Tough teams from Greenville and Quincy fell during the first rounds of Northern Section championship volleyball matches. The Tigers from Portola however emerged victorious as they faced their first and second challengers.

First on the PHS chopping block were the Herlong Vikings. The Northern Section Division 6 visitors fell hard, 3-0, on the PHS home court in front of Tiger fans. Individual game scores were 25-10, 25-12 and 25-11.

The game was well-played by both teams, strong set ups, kill shots fired with intention, and high adrenalin all contributed to a battle well worth the higher than usual playoff entrance fee.

The dynamic action on the court is not reflected in the 3-0 victory the Tigers earned. The Herlong girls did not just give over the win. The Vikings challenged the Tigers for the major portion of points with repeated three-part plays that kept the Portola team active and on their toes. The PHS Tigers responded with serves delivered with force and clean set ups that ensured kill shots were precise and plentiful.

After the win over the Vikings, PHS head volleyball coach Caitlyn Chan said, “I am extremely proud of the girls. I think they have a real shot at the Northern Section title if they maintain focus.” Chan and assistant coach Caitlyn Gannon have trained the Tigers to be a tight and very dynamic team. The PHS roster has grown to 11 players from the earlier season eight. Seniors Margaret Canseco and Emily Sheridan are doing their part to lead the team by example. They are truly fierce Tigers firing shot after shot at the opponents.

Next in playoff action, the Tigers traveled to Anderson to face the American Christian Academy Eagles. The teams struggled to climb to the top and succeeded. Individual game scores tell the story, 25-12 PHS, 25-21 PHS, 25-23 ACA, and a super close 15-13 for the winning Portola Tigers.

With the victory tucked securely in their belts, the Tigers came home with their biggest victory yet that moved the team forward in the playoffs to the semifinals. This is no small feat as the Division 6 lineup includes 15 teams.

The Tigers hosted the Fall River Bulldogs on Nov. 5 in the battle for a chance to compete at the final championship Nov. 9 in Redding. Check in next week’s Sport Section to see how the Tigers did fighting the Bulldogs for the championship shot.

The Burney Raiders and the Paradise Adventist Academy Cougars tried to bump each other out of the competition Nov. 5 to be the other team in the championship game Nov. 9.

The first evening of Northern Section playoff games, the Quincy Trojans battled in Colusa to stay in the competition, but the Red Hawks prevailed. The QHS team has had an ongoing rivalry with the Red Hawks all season long.

Colusa was the first team the Trojans played this season and they lost 3-0 on Aug. 21 hosted by the Red Hawks. The individual game scores were 25-16, 25-12 and 25-6. A week before league competition started, the Trojans hosted the Red Hawks in Quincy and lost again to the tough Colusa team, 3-0. The individual game scores showed the Trojans were growing in strength, 25-21, 25-7 and 25-20, but not strong enough to best their rivals.

League play ended for the Trojans with a victory over Biggs Oct. 22, 3-0, and a three-way league score tie with Maxwell and Portola, 8-2. Moving on to the Northern Section playoffs, neighboring league challengers from Portola compete in Division 6 and Quincy is sent off to compete in Division 5.

As luck would have it, the first team drawn for the Quincy girls was a match against the Red Hawks. Colusa won 3-0. Individual game scores were 25-3, 25-5 and 25-11. That game ended a great season for the Quincy Trojans who have fought hard all season long. The head volleyball coaching team of Michelle and Bill Abramson put in terrific efforts for these dedicated 2019 QHS athletes.

The Trojans have four freshly seasoned freshmen and three sophomores who have benefited from the experience of Quincy seniors who played their last high school volleyball game Oct. 29. Those four seniors put on terrific performances during their final 2019 season. Thank you QHS seniors, Rachel Abramson, Savannah Gay, Jordan DeMartile and Chyanne Morrison.

Unlike Quincy, the GHS girls received a draw to play a team they had never met for the first round of playoffs. The Redding Christian Lions won the battle in Redding 3-0.

The Indians presented a tough front by firing shot after shot. Goodson sent 31, Bustamante 27, and Copeland 16.

Greenville serves were met with tight defense from Redding. Only Goodson and Bustamante were able to send ace serves that the Lions were unable to return.

Bustamante had the most action handling the ball 40 times. Goodson made three blocks and handled the ball 14 times.

Copeland was the first GHS player on 16 Lion serves. Heard and Goodson were first to return seven, Morgan Tyler picked up six and Bustamante returned four.

The Indians are tough and have played their whole season with just seven girls. The peer pressure to keep going must have been intense. Bustamante is the only senior that will be graduating off the team and not on the court next year. Still, that one senior made a big difference; Bustamante will be missed. GHS head volleyball coach Dan Brown may again have a solo senior on the team next year, as Alexis Goodson is 2019’s only junior.