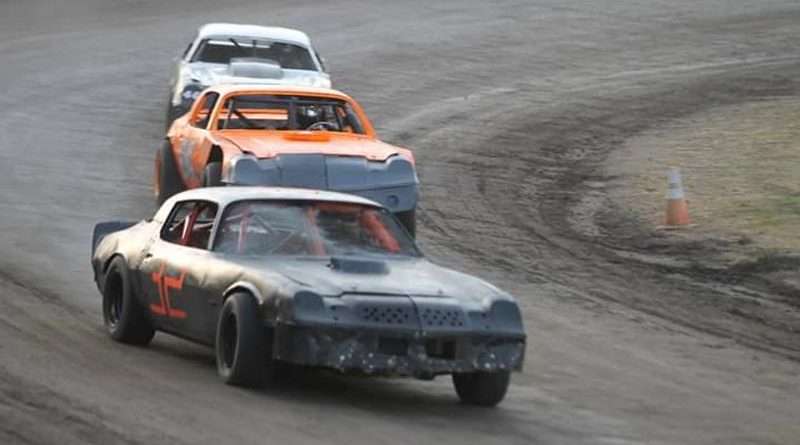 On the racetrack with his creation in May, taking first place, is Colton Lawson at the American Valley Speedway.
Sports
June 19, 2019June 18, 2019 Mari Erin Roth, Sports Editor

Greenville High School senior Colton Lawson took on something he has a real passion for as his senior project. He built a racecar! Lawson has had an interest in automotive building for some time and is competing in his third year at American Valley Speedway.

Lawson involved the community in his project byteaching soon-to-be-driving youth how to do basic vehicle maintenance. He showed them skills like changing their car’s oil and changing a tire. “Two-thirds of teens don’t know how to check their oil, change a flat tire or jumpstart a car,” said Lawson. “I think that these are very important things so I want to educate more teens on how to do them. Some of the kids took it in, but some didn’t pay attention.”

The process Lawson took to achieve his goal involved a number of steps. First he had to locate and purchase a car to turn into a racecar. Once that was accomplished he began stripping the car of all accessories such as glass, seats, carpet, plastic, headliner, etc. He continued until he was left with what Lawson called, “a rolling metal shell.”

Lawson connected the rear and subframes of the car with 2 by 3-inch metal tubing and planned how he would build a roll cage onto the vehicle. To accomplish this aspect of the project, Lawson did the welding himself. The results and consequences of the task would fall directly on Lawson himself as the driver. This was an important piece of the project if not the most important.

After the safety roll cage the GHS senior moved on to springs and suspension. “You have to decide what spring rate you want to use for suspension,” said Lawson. The old stock springs were swapped out with new springs purchased by the student in the desired weights.

Lawson removed the anti-roll bar, replaced worn shocks with new ones and purchased all new brake parts and installed them after removing the old ones.

Showing all around skills, Lawson machined the cylinder heads for screw in valve studs and a higher lift camshaft. He then installed new head studs in the engine block, new cylinder heads, lifters, a timing chain set, intake manifold and a new carburetor. It would be a real shame for a car with all these new parts in it to get smashed up on the racetrack, but sometimes that happens, we all know it does.

In the process of doing all the work to transform the vehicle into a racecar, Lawson used a welder, an angle grinder, a tubing notcher and a drill press. Basic hand tools were definitely on the list such as wrenches, hammers and screwdrivers, etc. Lawson used a valve spring compressor, power tools, sheet metal shears, a floor jack, plasma cutter, wire wheel, tap and die sets, air arc machine, oxyacetylene torches and a timing light.

Installing the switch panel and gauges, seat, seatbelts and all safety features were next. Lawson gutted the doors, hood and roof and then mounted those items to the car.

Now for the exterior: Lawson completed car preparation for painting and painted it. He then added the number, 32, and sponsor stickers.

All that was left was to take it to the track.