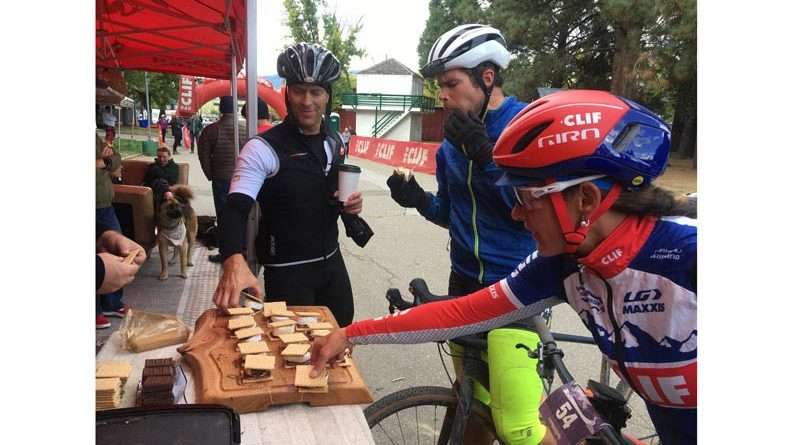 What a success! With a thousand riders taking to the trails on Mount Hough the final weekend of September, the fifth annual Grinduro could not be labeled anything less.

Local Quincy chiropractor Chris Anderson said he rode through “ sippin’ dots by Mother Nature.” Riders experienced hail, rain and even snow on some sections of the rerouted course that circumvented recent damage from the Walker fire.

“There was a 3-mile section today that was steeper than Downieville and it was after 40 miles!” said Anderson. “We ride up behind Argentine, then down to 4-corners then back up to Mount Hough and down, kind of a figure 8,” he said describing the new route.

A friendly ambiance of multiple campfires surrounded with benches filled the main drag at the Plumas-Sierra County Fairgrounds both Friday and Saturday evenings.

Sumptuous vegan faire was offered alongside carnivore food stuffs for riders and volunteers in a buffet line. Adult beverages of all sorts were very, very popular with local breweries competing for attention alongside national brands.

Sturdy steeds (bikes) were on display like golden chariots and puppy dogs were plentiful for petting and adoring. Smiles were the expression of choice faces of racers, volunteers and spectators throughout the weekend, even in the rain.

That’s one thing hard to miss about the crowd; they seem to be practically ecstatic all the time. The attendees make a good case for the energizing affect of outdoor sports.

Top placers for the event are listed in Sports Scores this week.