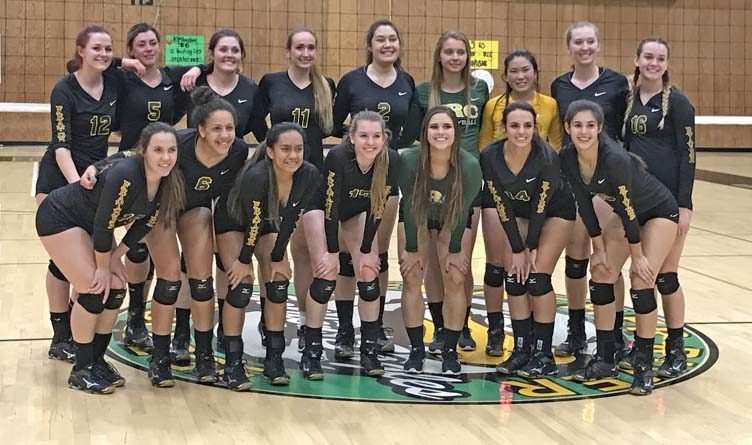 FRC improved to 16-8 overall and ended its Golden Valley Conference play with a 9-1 record.

The second-seeded Quincy Trojans and the third-seeded Los Molinos Bulldogs faced off on Nov. 10 in the semi-finals of the North Section playoffs with a Section Championship berth on the line.

The Trojans were defeated 3-1 by the Durham Trojans in the Northern Section Division V Championship game Nov. 12 at Red Bluff High School.

Despite the loss, Quincy was selected as the number 10 seed for the California Division V State Playoffs and plays at seventh-seeded Capital Christian in Sacramento tonight at 7 p.m.

A close opening game proved to excite both cheering sections, but the Bulldogs rallied and pulled ahead late, taking the first game 25-20.

Los Molinos took the early lead in the second set, but the Trojans came fighting back.The home stand’s lively cheers energized the Trojans to tie up the game at 10-10.

Quincy continued to roll behind some stellar serving off the hand of Rebekah Grammer, giving Quincy a 13-10 lead.

The Trojans pulled even further ahead when Morgan Fowler, Henderson and Sydney Gott came up big with back-to-back-to-back kills to make the score 17-13 Quincy. A Fowler ace sent the Trojans in a scoring frenzy, taking the second game 25-21

The third game nail-biter as both teams rode close the whole way, resulting in a tiebreaker that finally ended with Quincy on top, 28-26.

In the fourth game, QHS held the lead for most of the game, despite some great efforts by the Bulldogs; the Trojans could not be stopped.

The Quincy squad secured the win in the fourth game 25-20, giving the Trojans the win and the championship berth.

QHS volleyball coach April Gott was very pleased with the team performance. “We are so lucky to have such an amazing group of hard working young women. This group never fails to make me smile at the end of the day,” said Gott.

Senior Morgan Fowler expressed her feelings after the game. “I feel really great, I’m really proud of my team. It’s something that we have been working towards our whole careers.”

“This team has so much talent,” said Coach Gott, “now and in the future it’s a team you want to watch put it all out on the floor. This team is Trojan pride.”

Portola is the number eight-seeded team in the NorCal Division VI playoffs. The Tigers play tonight at Woodland Christian in Sacramento at 7 p.m.