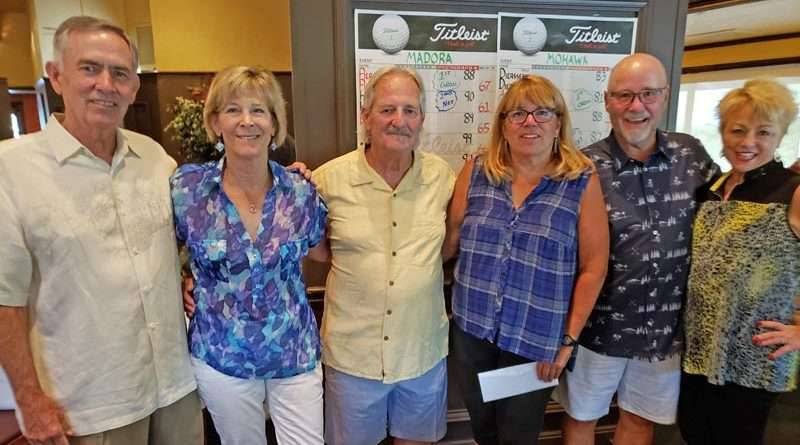 Bailey Creek’s Women’s Golf Club looks forward to another week of golf and welcomes any new players, guests and members. Regular play days are Wednesdays, arrival time 10:30 with tee off at 11 a.m. Call the pro shop 259-4653 or Jenni Cesarin (Captain) 284-7469 if interested.

Outstanding course conditions and fantastic weather continue to make golf at Graeagle Meadows something special. Weekly Wednesday and Friday play days continue to offer something for everyone, Fridays being low net plus skins, and Wednesdays a team game of some sort.

On Friday, July 19, we had 13 sign up, everyone playing from the combo tees. First place, with a low net 66, was taken by Andy Knudsen. Mike Gibson came in second at 67, while four players tied for third place at 68. Those included Jack Gilbert, John Scott, Bob Davies, and Mark Yuill. There were four skins awarded, two for Jack Gilbert and one each to Jim Reynolds and John Scott.

On Wednesday, July 24, 18 GMGA members, plus two guests, brought the field to a total of 20. The game was four-man teams playing 3-2-1, a wicked variation of the more common 1-2-3. Simply put, three best scores were to be taken on the first hole, two scores on the second hole, and one best score on the third hole, then repeated on through the course. It should bring a smile on the face from those familiar with the handicapping of holes at Graeagle Meadows, the three score holes being some of the more difficult on the course. Taking first place with a combined score of 117 was the team of Dan Anderson, Bert Bellows, Dennis Flynn, and Norm Nichols. In second place, with a score of 120, was the team of Jim Reynolds, John Scott, Jack Gilbert, and John Grasso. By the way, Jim Reynolds shot a net 63 with a gross 76, which included three sandy birdies, one of his best rounds of the year. Congratulations, Jim!

Final results and the wrap-up of our 2019 Match Play competition were announced to our membership. After weeks of competition, the 2019 Match Play Champion is Dave MacDonald. Dave played his see-saw championship match against Jim Oster having to take it down to the last hole to win the match. Meanwhile, Gene Carr and John Sciborski battled in a consolation match. Throughout the competition, Gene and John were never one stroke apart, finally tied at the 17th hole. On the final hole however, Gene left no doubt with a birdie while John stumbled with a bogie. Congratulations to both Dave and Gene, our 2019 match play champions.

Questions about the Graeagle Men’s Golf Association can be sent to [email protected] or by visiting the club website at gmeadowsclubs.com/MenHomeDir/index.html.

Twenty-four GMWGC  members competed July 24th in the July Ace of Aces Qualifier. The low gross and low net winners qualified to compete in the season-end Ace of Aces Playoff.

Does this heat keep golfers away? Not at Mt Huff Golf Course! The club has a lot of fun on Wednesday morning scrambles. “We are always welcoming new participants, and today was no exception,” said Margery Joseph. “Come on over and join in.”

“Have a great week and keep swinging,” said Joseph. Interested folks may call the course to get signed up for a day of fun and prizes, 284-6300.

It was also the final day of Match Play.

There was one chip-in by Jan Enloe.

The Plumas Pines Golf Resort held the 14th annual Couples Championship on July 21st. This year’s format was one best ball of partners with each player contributing a minimum of 6 holes.

Closest to the hole winner in the Mohawk Flight was Jan Anderson. In the Madora Flight winners were Bev Parry, Randy Magliano and Bill Grijalva. Brandon Bowling, Director of Golf, presented all the awards after a fabulous dinner at Longboards.

The Whitehawk Ladies Invitational is Aug. 13 and the theme is Hawaiian Paniolo DAZE. Paniolo is the Hawaiian name for cowboy. We always have a need for extra players to fill in foursomes or match up with members. We have a beautiful course, excellent luncheon and wonderful tee prizes for the day. Call the Whitehawk Ranch Pro Shop at 836-0394 and tell them of your interest in playing in the Ladies Invitational and please leave your name and number. “We look forward to talking with you,” said Marcia Zeigler.